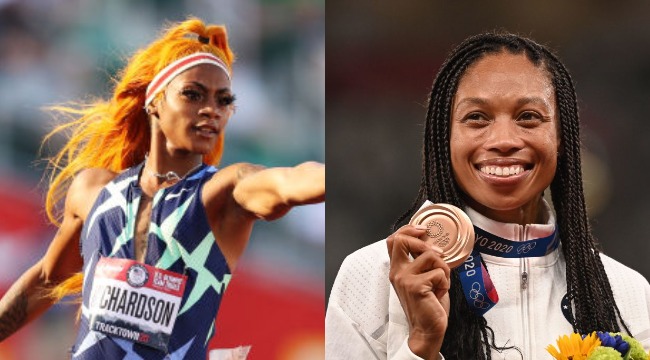 Allyson Felix is the most decorated Olympic track athlete this great nation has ever known, earning 11 medals through five Olympics dating back to the ’04 Games in Athens.

This week on Jimmy Kimmel, when guest host Steven A. Smith ate up interview time with Felix by asking her about the Sha’Carri Richardson debacle, no one would have faulted her for nodding off in the chair. That’d be like Stephen A. asking LeBron about Mac McClung on primetime television.

Instead, the 35-year-old showered Richardson with pleasantries and well-wishes.

“She’s obviously been through so much, and I hope that she’s supported,” Felix said. “I hope that people rally around her.

“Obviously she has a great personality and she’s brought a lot of attention to the sport. And I think she’ll be in the sport for a very long time. I think just more than anything, for all athletes, there’s so much that goes into it. So just give her the support that she needs.”

This is the woman y’all stan on twitter. pic.twitter.com/vpPfjM1aPp

Pepper in a little Jamaica-shaming while we’re self-immolating.

It’s a sad reality, but sometimes it’s the most disappointing incidents that breed the best reactions.

Welp, my time defending Sha’Carri is over. It’s been fun. Prayers down. pic.twitter.com/3rOibfU6yx

When you've been defending Sha'Carri Richardson 100mph then she comes for Allyson Felix… pic.twitter.com/deiHxVW6Wv

Sha'carri Richardson shading Allyson Felix like Allyson Felix is not one of the reasons why female track is such a big sport , especially for black women…. ? Lmfao bye 😂 pic.twitter.com/dXKaJOrVpT

How Black Twitter pulling up on Sha'Carri Richardson after she bad mouthed Allyson Felix pic.twitter.com/FmdS1TZeY5

Allyson Felix has 11 gold medals and sha’carri Richardson who’s won literally nothing yet is treating her like a jv track coach lmao unbelievable https://t.co/rGAbSsBjej