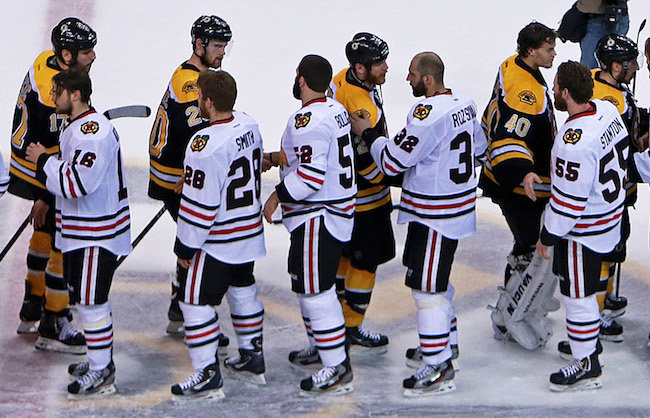 I’ll admit it: for the most part, I’ve had very little concern about the possibility of being infected by coronavirus (or, as nerds like to call it, COVID-19).

I’m a healthy 24-year-old fella with an immune system that is just cranking away on all cylinders. In fact, the last extended illness I had was during my sophomore year of college and all it took was chugging some Dayquil and that was the end of it.

So yes, when it comes to the coronavirus, my hubris has been showing. However, I’m still abiding by the general rules of pandemics: wash your hands and don’t touch your face (the latter of which I didn’t realize I loved doing so much until the warning was issued).

I had been fortunate to not have been involved in any precarious situations since this outbreak that has taken the world by storm—at least until the end of my most recent beer league hockey game.

I started playing in a men’s league last fall. It’s a great way to get some exercise while also trying to recapture some of that bygone glory that came with playing in high school.

Part of me still hopes that a pro scout’s car will break down outside the rink one day, forcing him to take refuge inside while he waits for AAA only to see me snapping some crisp breakout tape-to-tape passes that give him no choice but to hook me up with an entry-level deal.

There’s obviously no chance of that happening but it’s still fun to fantasize about.

Anyway, after a hard-fought three periods, my team dropped a heartbreaker 4-3 causing us to miss the playoffs—to quote Maxwell Smart—“by that much.”

With our head’s high (we were losers, but prideful ones) we made our way to center ice for the customary post-game handshake.

Handshakes are common across the sporting landscape but they’re really big in hockey. Guys with knocked-out teeth and blood dripping down their faces put aside their differences to say, “Hey man, good game.”

The first mistake I made that day was when I removed my glove.

Listen, I’m what you call a gentleman. I shake everyone’s hand like we just finished hashing out the deets for some big corporate merger.

I made my way through the line repeatedly dropping “good game” while lying to players who did not, in fact, have a good game. I even shook the hands of most of my teammates and both referees. I was on an absolute handshaking heater.

It wasn’t until I was in the locker room that I realized the true error of my ways.

I had just shaken around two dozen, hot, sweaty hands in the middle of a worldwide pandemic.

I began doing the math despite not being a math guy by all accounts. If I had shaken hands with so many people who had probably come into contact with dozens of others in their everyday lives, who’s to say how many of them had encountered someone currently rocking coronavirus in their body?

I realized that I had just upped my chances of becoming one of those statistics we’re all seeing on the news all because I had the audacity to be a good sport.

Nice guys really do come in last. I should’ve gone the route of straight-up douchebaggery. I should’ve straight-up iced the other team; a metaphorical mic drop that carried the added bonus of less potential transmission via contact.

Instead, I was left being a liar and a walking petri dish.

When I initially heard there were calls to forego traditional handshakes across the sporting world, I scoffed.

I’m not going to bump forearms like they’re doing in the Atlantic 10. That’s a sacred act reserved for Misters McGuire and Canseco. I refuse to shake hands with fans that don’t exist like Cristiano Ronaldo recently did (although it’s easier for me because I don’t have fans in the first place).

However, I now wish I would’ve gone full-on Bash Brothers while going through that line.

After that game, I think I washed my hands around 100 times but the damage had been done. I had already wiped the sweat from my face with my potentially infected hand and—even worse—had removed my mouthguard with the same one.

I’m haunted by this mistake. In fact, this morning I walked past the TV and there was a story about a group of elderly people in some sort of rec league (I’m not completely sure what sport it was but it’s probably safe to assume it was shuffleboard or bocce). They had been advised to not shake hands or make contact of any kind following a game and instead just walked past each other to acknowledge everyone’s efforts.

That idea seems really weird if you run through what it would look like in your head but it sure beats the alternative and the aftermath that could come along with it.

I’m sure that right now, those delightful old folks are enjoying some sort of easy-to-eat food—perhaps some kind of soup or one of many varieties of pudding—with not a care in the world. Meanwhile, I’m left scrubbing my hands into a pulp just because I had the audacity to marry my “good game” with a firm shake.

Will I regret it? I guess I’ll find out once the 14-day incubation period comes to a close.