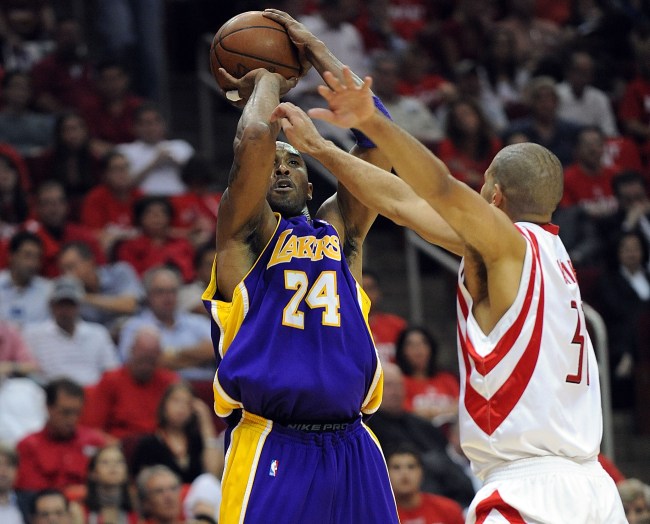 Former NBA player Shane Battier was one of the most lethal defenders in the game. Scrappy, smart and talented, Battier blended his size with nonstop effort to take on the difficult challenge of guarding the opposition’s best player. One of his most classic matchups? Kobe Bryant, who often had some great battles with Shane Battier during their time together in the league.

While Battier was pretty successful against most players, like most defenders, he had difficulty keeping Kobe in check. And, although Bryant did average 28.6 points per game in their 37 career meetings, the two had a pretty close win-loss record, the Black Mamba’s Lakers holding a 20-17 edge of Battier’s teams, showing that there wasn’t a huge advantage with the final results.

One of the ways Shane Battier at least tried to slow down Kobe Bryant was by famously throwing a hand in front of the shooter’s face. While the tactic was believed to be a way to blind Kobe from seeing the basket, Battier recently revealed the real reason he used the move — and it was by getting in the head of the uber competitive Bryant in a unique way.

Appearing on the The Brodie & The Beard podcast, Battier admitted his hand in Kobe’s face didn’t impact his shot at all, but he still used the method defensively because it threw a wrinkle into Bryant’s game, and he would need to prove that blocking his vision wouldn’t work on him. Take a look below at Shane Battier’s explanation.

“I knew that if I had any chance of staying with this guy, I would have to play my best game, I’d have to be so mentally sharp. I couldn’t make any mistakes,” said Battier. “And even then, I still got torched (laughs).

“But he was an amazing problem to try to solve through data. A funny story about the hand in the face, and Kobe and Mamba Mentality says, ‘That didn’t work. I have so much muscle memory, I saw right through it.’

That’s actually incredible by Battier. As one of the more cerebral players of his generation, the former Duke standout relied on data and Kobe’s own relentless competitiveness as a way to try and defend him. Sure, a hand to the face may not have worked, but it gave Bryant something more to think about — and work on overcoming. That game within the game was part of what Battier loved the most while matching up with the Mamba.

No player took the responsibility of guarding Kobe Bryant quite as seriously as Shane Battier. And, while his methods were unconventional and unique — and may not have always even been effective — knowing he had to try and match Bryant’s mental toughness in order to make him think harder on the basketball court is next level genius. It wasn’t trash-talking, but, instead, just a slow and steady game of chess.