Shane Beamer Eviscerates Fans Who Doubt His Most Recent Hire 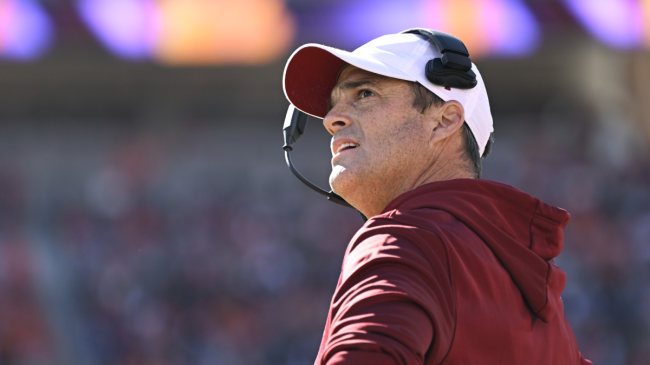 Shane Beamer heard you, Gamecock fans. He doesn’t agree with you, but he heard your cries about his most recent hire.

A solid portion of the South Carolina faithful has been adamant on their displeasure with Dowell Loggains being named as the next offensive coordinator. Most point to Loggains being voted the “Worst Play Caller in the NFL” just a few seasons back.

Hearing the angst, the media team tried to smooth things over by posting a series of cameos involving former NFL QBs showing support for the new OC. That didn’t quite work as planned.

It seems that the South Carolina head coach is done trying to win over the approval of his fans, and he let it be known in his most recent press conference.

While introducing his new play caller to the world, Shane Beamer opened up with a few choice words for his doubters.

“I feel like some people need to be reminded of the things that we [as a staff] have done at South Carolina this past season, and the momentum that we’ve created since then.

Well, if that’s not a direct shot, I’m not sure what is.

Many around the program reacted to that initial introduction on social media.

This is an all-time presser from Shane Beamer.

He has torched every naysayer, detractor, doom-and-gloomer coming off back to back top 10 wins.

The Dowell Loggains hire was well-vetted he says, and had several offers.

'We hired a big-time coach and couldn't be more excited.'

Shane Beamer continued on in his path of destruction while backing Dowell Loggains, the new offensive coordinator.

“I easily could go out and hire the hot name… Names that were on the websites. Names that the general public thinks [is a guru] … I’m interested in hiring the guy that can move this program forward.

“I’d say [past hires] have turned out to be pretty damn successful at South Carolina… We were fortunate to hire Dowell Loggains. We hired a big-time coach and couldn’t be more excited.”

Gamecock fans are scarred from previous seasons of putrid offense, giving them hesitancy to support someone who’s already been named the worst at their profession.

Shane Beamer doesn’t seem to care about the public perception. Hop on the train or get off. That’s his message to followers.