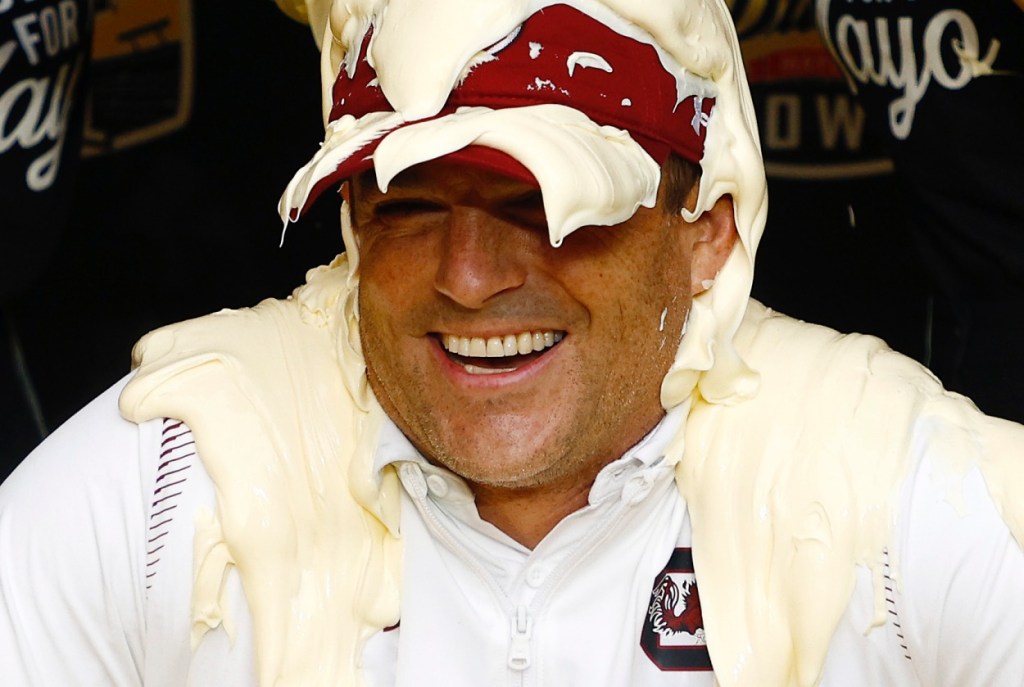 The University of South Carolina Gamecocks football team and the University of Kentucky Wildcats aren’t traditionally rivals. Both teams are in the SEC East Division so they’re natural rivals based on that. But outside of that there isn’t the same blood-boiling rivalry as the South Carolina and Clemson or Kentucky and Louisville.

Things could be changing after a series of escalating comments from Gamecocks head coach Shane Beamer and Kentucky’s Mark Stoops. It’s a strange series of events. The perceived slights may or may not be intentional. It started back in mid-July when Shane Beamer was front and center in this Gamecocks Football hype video:

Get that mic ready pic.twitter.com/4PtICIuh0Z

After that, Kentucky’s Mark Stoops appeared to throw major shade at Shane Beamer. As we reported about a week ago, a Talkin’ Season clip of Mark Stoops had fans thinking he was speaking directly about Coach Beamer. Stoops said

“I think it’s the respect throughout the league… I’ve talked years ago about climate vs. culture. It’s easy to change a climate. You just change your uniforms, talk some game, dance around, put on some stupid sunglasses… But to change a culture is at the core.”

A rivalry is building between Mark Stoops and Shane Beamer https://t.co/5ZnOBxIXvt

It’s hard not to attribute those comments from Stoops to being about Shane Beamer in that video where he puts on sunglasses and dances around to Soulja Boy’s ‘Turn My Swag On’, right? Right.

According to this recent tweet from A Sea of Blue, Mark Stoops says the comments had nothing to do with Coach Shane Beamer:

Mark Stoops comments on the supposed Shane Beamer dig with the SEC Netwerk.

Says the comment had nothing to with Coach Beamer.

Also, made a joke from last weeks situation in the process.

I hope laugh the way we did in the media room.

South Carolina’s head coach doesn’t see it that way and neither does the crowd. KY Insider‘s Tristan Pharis tracked down this clip from over the weekend showing Shane Beamer getting a South Carolina crowd riled up with comments about ‘climate and culture’. Clearly firing a direct shot back at Stoops and Kentucky as the crowd goes wild:

“Make no mistake about it, the climate in our facility is hot right now, but the culture is a HELL of a lot hotter.”@CoachSBeamer #Gamecocks @GamecockCentral pic.twitter.com/F0VzkA8Wf6

Some of the replies to that video are all over the place. There are plenty of ‘fire’ emojis. And other comments about people telling the coach to just shut up and win.

Here are a few tweets from both sides of the Shane Beamer-Mark Stoops feud:

So @CoachSBeamer chose to say this after @UKCoachStoops said his comments weren’t about Beamer and SC? Interesting move by Beamer. Stoops doesn’t forget and the Cocks have to come to Lexington this year. https://t.co/2gzA3USxPP

The B in BDE stands for Beamer https://t.co/PQP7gTEz1U

To be honest, he really just needs to do his job and shut up. He’s making too much noise for a coach who hasn’t done anything. Funny how the coaches who win the least are the ones out being this obnoxious. Just go to work and let the results speak for themselves. Chad Morris 2.0

The #20 ranked Kentucky Wildcats play host to the South Carolina Gamecocks on October 8th this season. It will be Kentucky’s 3rd SEC game of the season and 6th game of the season overall. There will certainly be tensions between both sides.