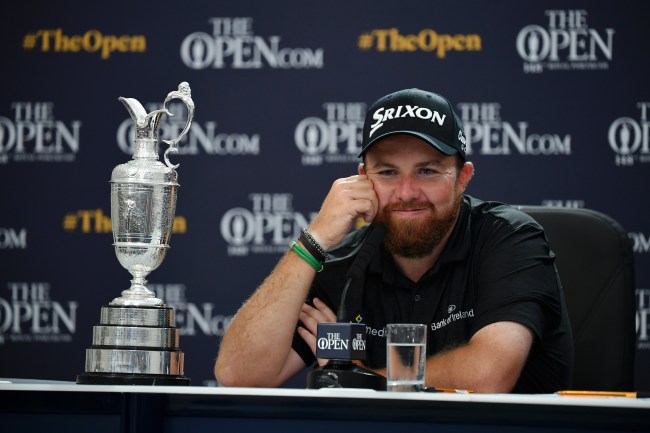 Shane Lowry shocked the world this past weekend when, after all the dust had settled, it was the 32-year-old from Ireland who was left holding the Claret Jug, finishing an unexpected victory at this year’s The Open Championship. And while Lowry’s impressive tournament left him as the champ — finishing with a six-stroke victory at 15-under par that saw him take home a cool $1.935 million — he wasn’t the only big winner after winning The Open title.

That’s because, as we’ve seen plenty of times in the past with sports gambling, some super lucky sports bettor took a flier on Shane Lowry at 105-1 odds to win The Open Championship, putting $150 on him in hopes that, just maybe, the guy could pull it off. Well, after Lowry ended up victorious, that gambler was celebrating in mega fashion, because he/she walked away with nearly $16,000 worth after the ballsy bet. Take a look at a picture of the purchased ticket below, via Bleacher Report.

I’ve had a lot of luck in my day, but, shit, I’ve never won nearly $16,000 in a four-day span for spending just $150; that’s some serious return on investment. Someone, somewhere, has to be the biggest Shane Lowry fan now, so it’ll be interesting to see if any additional details emerge from this story.

Naturally, once Twitter got word of the insane payout, people had some reactions. Take a look below.

Of course, this isn’t the first time a sports bettor has gotten mega lucky, as a few people won various thousands of dollars after placing small bets on the St. Louis Blues to win this year’s Stanley Cup — which, as we all know, ended up happening. And, remember, we also saw someone cash out a $1.2 million check after dropping $85,000 on Tiger Woods to win this year’s Masters Tournament.

So what’s the moral of the story? If you have some money to blow, have a gut feeling on something and are lucky AF, sports gambling could be a nice little payday — just ask whoever just won this $16,000 thanks to longshot Shane Lowry.