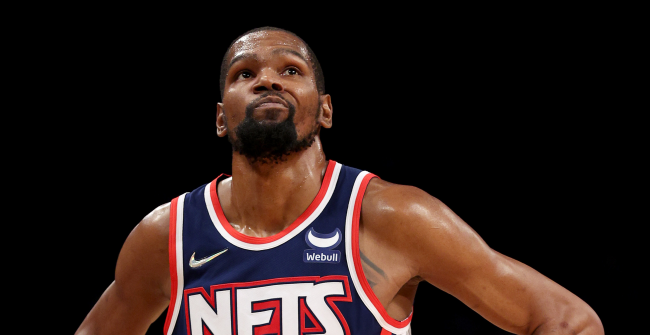 Shaquille O’Neal heard Charles Barkley’s recent “abject failure” remarks about Kevin Durant and not only did he agree with them, he piled on with more criticisms.

“[Durant] gets mad when we say it—he piggybacked on the Warriors to win his first two championships. If you go back and look at his career, as the best player and being a leader, he’s been an abject failure,” Barkley said last week. “Every time he’s been the guy who has to be the leader and the best player, he has not had success.”

“He just seems like a miserable person. I call him Mr. Miserable,” he continued “He’s never going to be happy.”

Thursday on The Big Podcast, Shaq said, “Yeah, [Durant’s career outside of Golden State is an abject failure]. If you go back and look at his career as the best player and being the leader and all that goes with that. See we were there, we saw it. OKC, up 3-1. One more game, and when you’re the guy, all the pressure goes on you.

“Lotta people tlking about the bus driver… Chuck was absolutely right. He was not driving the bus in Golden State. You were on the bus, was sitting up front.”

“Charles Barkley is calling Kevin Durant’s career outside of Golden State an ‘abject failure’ … Do you agree?”@SHAQ: “Yeah. … If you’re the guy and you ain’t get it done, that means you failed.”#TheBigPodcast: https://t.co/1ccPgWJWvs pic.twitter.com/7RiqPAoUDu

When asked if Barkley looks at his own career as an “abject failure” because he doesn’t have any championships, Shaq replied, “He does and he says it all the time. And I throw it in his face all the time.”

Returning the subject of Kevin Durant being an “abject failure,” Shaq added, “When guys like us go, ‘whoa, whoa, whoa,’ and you win and we don’t respect it, don’t get mad at us, that’s how we feel.

“If you’re the guy and you ain’t get it done, that means you failed,” Shaq concluded, then jokingly admitted that he doesn’t actually know what the word “abject” means.