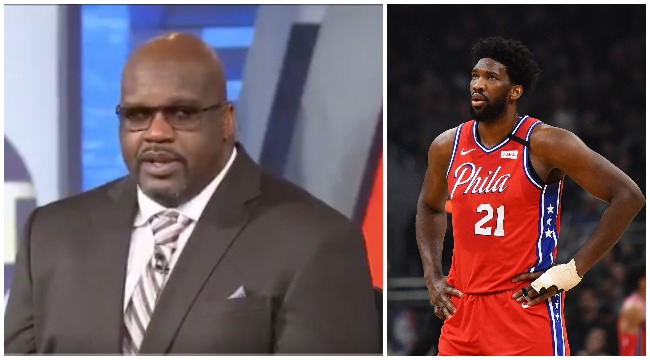 Most of you reading this have picked up a basketball before Joel Embiid.

The Sixers center has gone on record saying he first picked up a basketball after being inspired by Kobe Bryant’s 2010 Finals performance. For perspective, LeBron had already been in the league seven years.

So every time I see Joel huff and puff down the court directly after showing he has what it takes to become the most dominant big man for the next decade, I have some sympathy.

But Thursday night was bad.

In a huge test against the 1st place Bucks, Embiid was 1-for-10 from the field in the first 10 minutes, finishing 6-26 with 19 points in 33 minutes in the Sixers fourth consecutive loss. Joel, who is a 7-footer, also shot 10 three pointers for some reason, converting on just one.

“Joel Embiid should dominate under the basket every night.”#PhilaUnite

Shaq, who has taken aim at the 25-year-old’s lackadaisical play before, pulled no punches.

Shaq going off on Embiid, calling him soft😂pic.twitter.com/x1Ep8AY1QZ

Shaq was alluding to Embiid’s comments Wednesday about having to “sacrifice a lot.” He also said  “hard to find that balance” because the Sixers don’t yet have an offensive identity halfway through the season.

Charles was equally as ruthless, calling the Sixers the “Cleveland Browns of the NBA.”

Chuck has some thoughts about the Sixers. 👀 pic.twitter.com/VeVu4cxvw7

Best of luck to Embiid, Simmons, and Odell going forward.