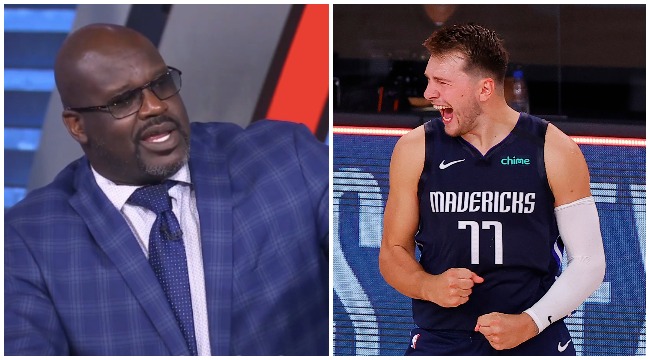 Luka Doncic’s 43/17/13/28-foot game ending Game 4 will go down as the Greatest Playoff Performances Ever By Someone Barely Eligible To Drink An Alcoholic Beverage Legally.

The 21-year-old willed a Porzingis-less Mavs team from 21 down to deliver a cold-blooded *Mike Breen voice* BANG just hours after suffering an ankle sprain that looked no different than the one that just sidelined fellow bitch ass white boy Gordon Hayward for a month.

The irrationally enduring idea that Luka is nothing more than Toni Kukoc 2.0 is now as delusional as still believing the Easter bunny is real or that Michael Jordan voluntarily opted out of basketball demagoguery to play double-A baseball in Alabama.

Players with at least 43 points, 17 boards, 13 assists in postseason history:

Sunday night will forever go down as Luka Doncic’s I Have Arrived moment, or as we say in Slovenian, Prišel Sem.

While the NBA world collectively marveled at the Power of Luka, TNT analyst and my friend Shaquille O’Neal choice to channel his Gran Torino Clint Eastwood and poop on the parade.

DON’T TELL ME TO CALM DOWN SHAQ I’VE BEEN HOLED UP IN THIS GODDAMN APARTMENT FOR FIVE MONTHS SCROLLING THROUGH MY EXES FACEBOOK PHOTOS AND POUNDING CRAFT BEERS BY MYSELF LIKE I’M STEPHEN FUCKING GLANSBERG EXCUSE ME IF I TAKE A BREAK FROM WORRYING IF MY GRANDMOTHER IS GOING TO DIE TO EXTRACT A LITTLE JOY FROM A STRANGER THROWING A BALL IN A BASKET I NEED TO SPEAK TO A MANAGER.

Then he says he isn't better than Steph, Dame and Harden… anybody care to tell him Luka is 1 year older than his oldest son? pic.twitter.com/AijUpYdxSF

Shaq with the "IF Pat Beverly plays"

Shaq is on his head hatin on Luka like that. Sayin he’s seen that before from Steph and Harden. This is Luka’s first playoff go and on a bum ankle. Shaq’s too mad.

Damn you, Shaq. Can I just have this one fleeting sensation of happiness? Just this once.