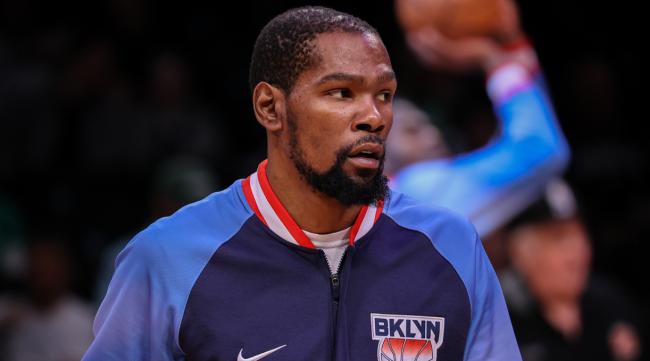 Kevin Durant may have four seasons left on his existing contract with the Brooklyn Nets, but strong rumors are swirling that he’s looking to move on to another team already.

“What I’m hearing is that KD is going to meet with the owner this week,” a source told Heavy Sports this week. “He’s going to go directly to the owner, Joe Tsai, sometime this week. We’ll see how that works.”

Some sources claim the Nets’ asking price for Durant is too high for anyone to pay. A rumored deal that was discussed between the Nets and the Celtics involving Jaylen Brown, Derrick White and a first round pick from Boston may or may not have happened, depending on who you believe.

On Tuesday during an appearance on The Rich Eisen Show, Shaq was asked if he would trade a player like Jaylen Brown for Durant if he were running the Celtics.

“No,” Shaq replied succinctly. “Not at all.”

After explaining why, Eisen said, “So the answer is no then.”

“The answer is hell no,” the Hall of Famer shot back.

After further discussion of why he would not trade Jaylen Brown for Durant (including how he handled KD and the Nets in the playoffs), Shaq admitted that Durant was probably “tired of all the extracurricular media activities that Kyrie was was bringing” and “wouldn’t have to deal with that anymore,” but still thinks he should stay in Brooklyn.

"When you put a house together, you should live in it…You, as a leader, should make it work, but you don't want to make it work, I guess…You know he's probably trying to get to a contender. It's easier that way."

Many fans agreed with him, but not everyone was buying what Shaquille O’Neal was selling with regard to Kevin Durant.

He knew who Kyrie was when he went there. That IS his best bud, he says. They WANTED to play together and moved some good pieces and a coach to put THEIR squad together. I say like Shaq.... make it work! Put in the hard work and do the damn thing!

Says the loyal overweight Superman that left Mamba at his prime to join Wade’s Miami? This guy is delusional!

Listen to Shaq’s entire interview with Rich Eisen, including his take on his buddy Charles Barkley flirting with the idea of leaving TNT for LIV Golf.