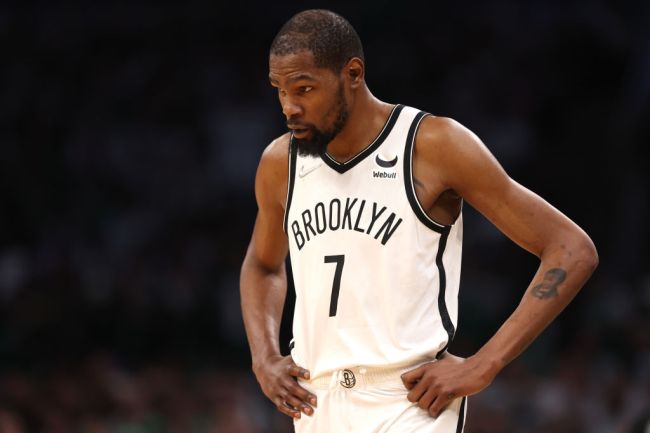 Since the beginning of the month, basketball fans have been patiently waiting to find out who would land Kevin Durant this offseason. Unfortunately, over the past few weeks it has seemed more and more likely that those fans will never be rewarded with the announcement of a Durant trade.

The Brooklyn Nets are reportedly okay with the idea of keeping Durant for the 2022-23 season if they don’t get the trade offer they want. Today, Chris Broussard reported on “First Things First” that the Suns, Heat, and Raptors.

Where in the world is Kevin Durant going?

"We see teams dropping out every day! Phoenix is out. Miami is out. Toronto is out. What's the deal to be made? The likeliest scenario is that KD starts the season in Brooklyn." — @Chris_Broussard pic.twitter.com/EiFlPAuL7r

We see teams dropping out every day. Phoenix is out. Miami is out. Toronto is out. What’s the deal to be made? Now, this Boston thing, if they want to give up Jaylen Brown, Marcus Smart, and if I’m the Nets, I’m demanding Robert Williams and three first-round picks. If they want to give up some kind of deal like that, then maybe it happens. But outside of that, where in the world is he going? The likeliest scenario is that KD starts the season in Brooklyn.

The Heat and Suns were named as Durant’s two preferred destinations when his trade request was first announced. With the Raptors out of the running for KD and the Warriors seemingly not interested, the Nets are quickly running out of options.

They made a ridiculous offer to the Timberwolves that unsurprisingly got rejected and they turned down the Celtics’ most recent offer.

At this point, there are only so many teams left that are strong enough contenders to make Durant want to play for them and can also offer the Nets enough to entice them to make the trade.

Maybe somebody like the Trailblazers or Wizards could join the hunt for Kevin Durant, but neither team has been reported to have actually made an offer.

The Brooklyn Nets may need to seriously lower their asking price soon or they’re going to run out of teams who will actually trade for Durant.