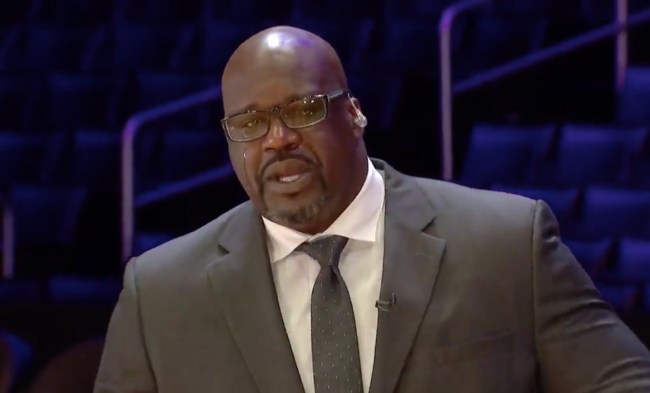 The Super Bowl is on Sunday but unfortunately the biggest sporting week of the year has been overshadowed by the deaths of Kobe Bryant, his daughter Gianna and the seven others killed in the tragic helicopter crash. Many athletes and celebrities have been put in a bind as to whether to continue to work during the tragedy despite prior commitments.

This afternoon, Shaquille O’Neal announced he will still appear his annual Shaq’s Fun House Super Bowl party in Miami the Friday before Super Bowl 2020 despite being emotionally crushed by Kobe Bryant’s tragic death.

Been going back and forth the past couple of days on if I should even have my event in Miami this weekend,” “Part of me wanted to stay to myself as I reflect what my brother and his family mean to me and my family. But in thinking what would Kobe want, what would he do? Kobe would want us to push through and celebrate life. So let’s do just that.”

Shaq will donate the entire proceeds from the party to the families of those lost in the helicopter crash as well as to the Kobe and Vanessa Bryant foundation.

“I’ll be dedicating and donating all my proceeds from Friday nights Fun House to all the families who lost loved ones and to the Kobe and Vanessa Bryant Foundation,” “Together we will celebrate all those who lost their lives in Sunday tragedy. RIP my brother, my friend and my homie, The Black Mamba. Until we meet again.”

Shaq was in pretty bad shape during Inside The NBA on Tuesday night so it’s safe to say that Friday’s appearance in Miami is going to be a tough one for him.

“I haven’t felt a pain that sharp in a while.. it definitely changes me.”’@SHAQ on the loss of his brother, Kobe. pic.twitter.com/dM5i0DDgGK