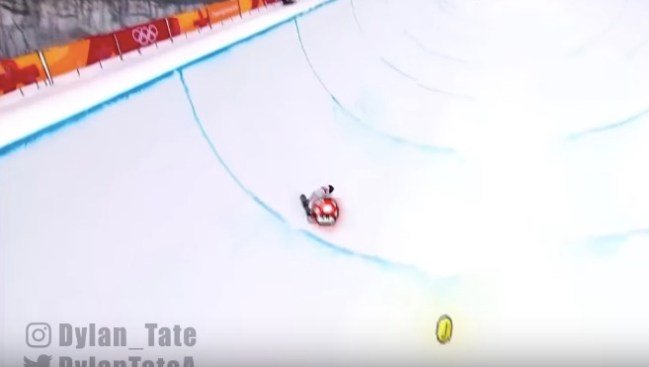 It feels like Shaun White won his gold medal at the 2018 PyeongChang Winter Olympics approximately five years ago even though it was just last month. For Team USA, our *major* highlights this year weren’t as frequent as Americans are accustomed to expect but we still finished with the 4th most Gold Medals and the 4th most medals overall behind Canada, Germany, and Norway.

The highlight of the Winter Olympics for many was Shaun White‘s Gold Medal winning run in the halfpipe. After finishing 4th at the 2014 Winter Olympics, the Flying Tomato returned triumphantly to the top of the podium. He’s the single greatest men’s snowboarder in history and it’s really not even close. 2018 might have been Shaun White’s last Olympic Games so it was the perfect way to go out, with gold.

YouTuber ‘Tater Tot‘ decided to have some fun with Shaun White’s Gold Medal run on the halfpipe by giving it a Super Mario Bros. edit that sees Shaun collecting gold coins and power-ups throughout the run:

Dylan Tate aka ‘Tater Tot’ says this edit took him about 36 hours of work which is pretty impressive because something like this would take me 36 weeks to put together. It is pretty ballsy though. NBC and the Olympics are pretty litigious when it comes to altering their Olympics footage but this one’s been up on YouTube for three days now and they appear to be cool with it. Shaun White even shared this video on his Facebook page via HuffPo and NBC doesn’t seem to mind. You can’t even tweet screengrabs without a claim getting filed. I guess the edit is just that good.