Shea Patterson Trips Over His Feet, Completely Embarrasses Himself, Gets Benched In Brutal USFL Debut 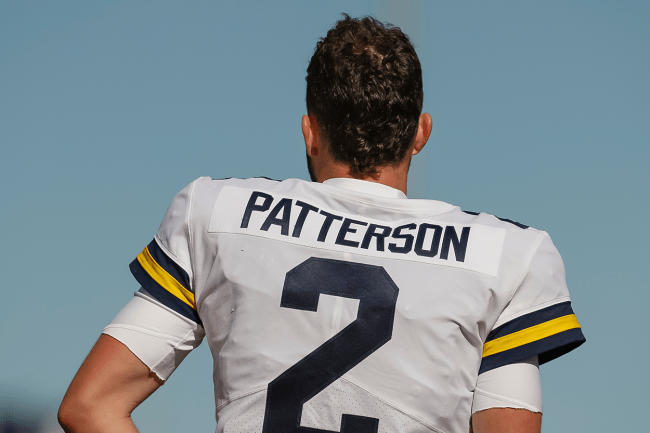 Shea Patterson is just not very good at football. No matter where he goes, embarrassing plays seem to follow.

Patterson, a former five-star recruit, began his college career at Ole Miss before an injury caused him to lose out on the starting job. From there, he transferred to Michigan and lost in the Peach Bowl in year one. After returning for his senior year with the Wolverines, Michigan went 9-4 and lost to Alabama in the Citrus Bowl.

Patterson did not beat Ohio State in either of his two years at Michigan. And yet, for some reason, he appeared to call out the state on Sunday.

When the 2020 NFL Draft rolled around, Patterson did not hear his name called and signed with the Chiefs as an undrafted free agent. He ultimately failed out of the NFL that year, bounced around in the CFL in 2021 and then was the first player selected in the 2022 USFL Draft by the Michigan Panthers.

Patterson and the Panthers made their USFL debut on Easter Sunday and kicked things off with a fumble on the very first play of the game. A few series later, Patterson appeared to take a shot at Ohio in his pre-snap play call.

On second-and-goal from the four-yard-line, Patterson took the snap, tripped over his own feet, fell to the turf, recovered, tried to make something out of nothing and fumbled. To add salt to the wound, the Houston Gamblers picked up the fumble for an 88-yard scoop-and-score.

SCOOP 'N SCORE FOR OUR FIRST TD OF THE SEASON 😱🤯

Here is an aerial look at the humiliating moment on Sunday that makes it just that much funnier.

Immediately after coughing up the ball for a Gamblers touchdown, Patterson was benched in favor of Paxton Lynch.

Paxton Lynch is now in at quarterback pic.twitter.com/a0Add7bRtk

Patterson did come back into the game and threw a touchdown, but it was not a pretty throw by any stretch of the imagination.

Tough scenes for Patterson, who was once bullied out of a fraternity party at Ole Miss for wearing a Canadian tuxedo. You simply hate to see it.