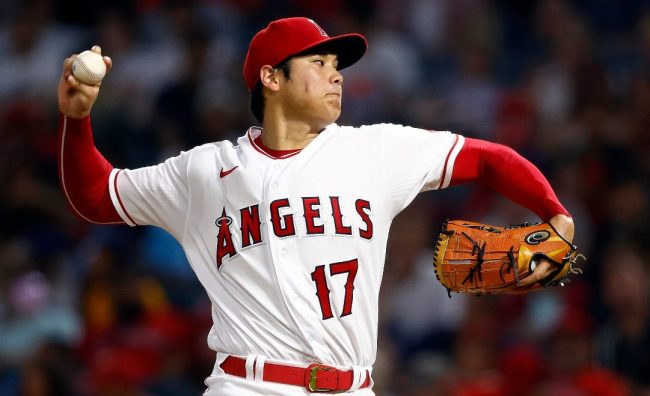 It feels like every time Shohei Ohtani plays a game these days he’s breaking some sort of historic record. The LA Angels star has plenty of time left in his career and has already placed himself within the game’s history books. It’s insane to watch him play, as he is a superstar-caliber player at the plate and on the mound. With Shohei Ohtani’s latest pitching stats, he is now nearing a Nolan Ryan franchise record.

According to ESPN Stats & Info, the Angels Ace has recorded a monstrous 165 strikeouts in 20 starts this year. That places him third in franchise history for most punchouts in 20 starts. Nolan Ryan holds the top two spots for having 211 K’s (1977) and 182 K’s (1973). Considering Shohei Ohtani is a two-way player, the fact he’s able to play at this level is absolutely wild.

Shohei Ohtani has 165 strikeouts through 20 starts this season.

This guy is not human. Not only is Shohei Ohtani playing as an elite pitcher, but he’s one of the league’s best batters as well. The Angels have an absolute stud on their roster, as it’s not every day a player gets compared to Nolan Ryan. As long as Ohtani keeps up the good work, he’s sure to receive a monster contract once he hits free agency.

He’s been an absolute unicorn throughout his career so far. Especially considering Shohei Ohtani’s hitting and pitching stats are amongst the best in the league. Look for him to maintain this high level of play as he is currently in his prime. Hopefully, the Angels figure something out financially, otherwise, Ohtani could hit the open market as one of the biggest free agents in MLB history.