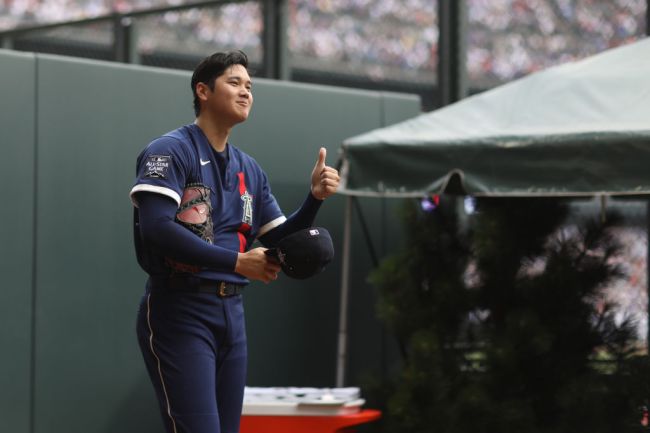 “Shohei Ohtani is a unicorn.”

“Shohei Ohtani is a super hero.”

“Shohei Ohtani is the next Babe Ruth.”

The 27-year-old two-way superstar was selected to his first-ever All-Star Game in his fourth MLB season. A native of Japan, he has played in the Nippon Professional Baseball All-Star Series multiple times. His 2016 NPB Home Run derby win was crazy.

When Shohei Ohtani won the Homerun Derby in Japan back in 2016
😱😱 he is just so chill 😱😱
pic.twitter.com/yEAMNiAcSg

Ohtani also participated in the 2021 MLB Home Run Derby on Friday and he did insane things again. This was before the Derby even began:

Shohei Ohtani nearly hit a ball completely out of Coors Field (498 feet). The Derby hasn't even started yet. pic.twitter.com/7EvIrkduAF

Ohtani put on a show but he was upset by Juan Soto in the first round. It took two dramatic tiebreakers, however.

Shohei Ohtani hit one 513 feet in the first round of the Home Run Derby 💣pic.twitter.com/uYKkdsZnR0

History on the mound and at the dish, again.

When it came to the actual game itself, he made his start for the American League as both the starting pitcher and leadoff hitter. It was a historic moment, as nobody had ever done so before.

Prior to his start, he was working to become a three-way athlete. Ohtani met Peyton Manning in the locker room and got some pointers on the quarterback throwing motion.

Getting some pointers from Peyton 🔥

The Angels slugger went 0-2 with two groundouts in the third and first. It didn’t stop him from smiling the whole time.

On the mound, Ohtani threw a 1-2-3 bottom of the first and then was replaced. He got Fernando Tatís Jr. to fly out as the leadoff man and the exchange before the at-bat was amazing.

This moment between Shohei Ohtani and Fernando Tatis Jr. before facing off against each other is everything! #padres #AllStarGame pic.twitter.com/BdbIJjKzfP

Ohtani’s historic night also made him the second Japanese-born pitcher to start the All-Star game since Hideo Nomo in 1995. We are witnessing greatness and if his second half of 2021 is as good as his first, we are in for a treat.

Shohei Ohtani is truly one of a kind. pic.twitter.com/Z5q1oj5NPj

That man is the face of baseball.