Unlike the NFL, college football is a game of signs and symbols.

Signs and symbols pop up in almost every facet of college football culture: The meme-able, fan-made signs that make their way behind ESPN’s College GameDay to mock Mike Gundy’s mullet. The unmistakable hand gestures thrown up to hook ’em for the ‘Horns, pitch ’em for the Sun Devils, and shout out “The U” for Miami’s much-beloved institution of higher learning.

About little under a decade ago, as the West Coast, no-huddle offense began to evolve, these signs started making their way onto the sidelines and into the game of college football itself. First it was in the PAC-12, where Oregon’s Chip Kelly ran a high-tempo offense with a unique, mysterious sideline signaling system in the 2010 season. The strategy worked, marching the Oregon Ducks to a BCS title game against Cam Newton’s Auburn, where they lost by a field goal.

Years after being popularized by Chip Kelly, play cards are still widely used on college football sidelines. To deconstruct what these signs mean to the players on the field, I sat down with former UCLA outside linebacker Kevin McReynolds. In the video above — which we’re calling “Play Card Playback” — Kevin dishes some real-talk on what these ridiculous signs really mean to the game of college football, as a whole. 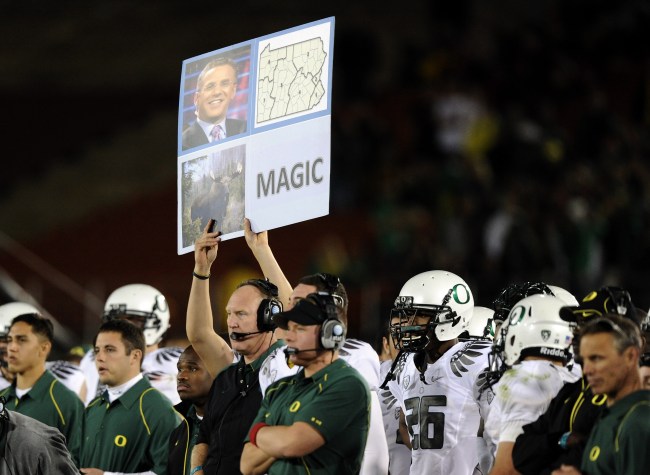 LOS ANGELES, CA - OCTOBER 30: Oregon Ducks use a sign to signal a play against the USC Trojans during the fourth quarter at Los Angeles Memorial Coliseum on October 30, 2010 in Los Angeles, California. (Photo by Harry How/Getty Images)