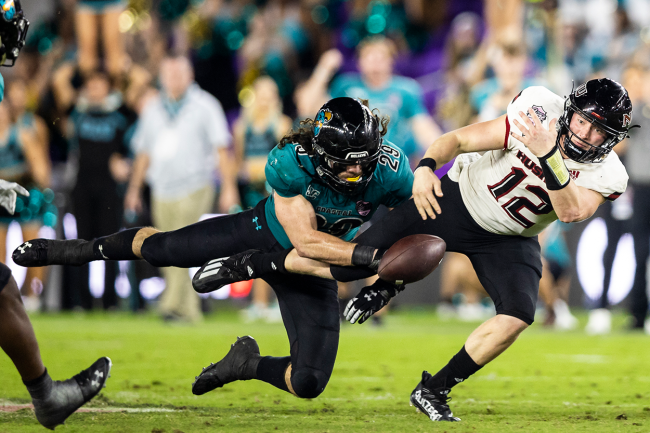 Over the course of the last two years, Coastal Carolina football has skyrocketed to national relevance. The Chanticleers play fast, hit hard, and have a lot of fun doing it.

At the forefront of much of their success was linebacker Silas Kelly, who signed with the Browns as an undrafted free agent.

On the field, he is a heat-seeking missile.

Jake Bentley playing means i HAVE to bring back my favorite @sila_SK_elly play pic.twitter.com/COgTutrvFf

In case you didn’t know yet, Silas Kelly is really good. Tackle for loss on third and long 👌🏽 Chants ball.@sila_SK_elly pic.twitter.com/AgRLGb0mmT

Good Afternoon #Browns fans Silas Kelly is a great addition to the Linebacker Room. The amount of ground he covers to make this tackle 👀. Give @sila_SK_elly a follow to Welcome him to Cleveland!
pic.twitter.com/ULB5cc1ZbE

On the sideline, Kelly is an electric factory who always has his team pumped up and ready to go.

Gotta send a birthday shoutout to the electric factory that is @sila_SK_elly⚡️ pic.twitter.com/22NINFuQpF

You might watch this and see @sila_SK_elly attacking the weights like an absolute savage… I see a team coming together competing in everything they do, attacking the day! #believe #stackingdays @CoastalFootball pic.twitter.com/OhxsccOtKm

Silas Kelly with the bunnies!

In addition to his athleticism, Silas Kelly rocks the best mullet in football. It’s not even close.

When he pulled up to rookie camp in Cleveland earlier this spring, the hair was in full form.

Silas Kelly needs to make the @Browns roster out of camp. Lost so much Steeze when we cut the Scottish Hammer last year. Need to bring the BRO back to CLE. 😎 pic.twitter.com/wGhUFRRSbi

Over the course of the last few weeks, Kelly has impressed the staff in Cleveland with his on-field play. Although a roster spot is still a long way away, the former Chanticleer is doing all of the right things to earn his way onto the Browns.

In addition to his play, he has turned heads with his mullet. Kelly spoke with defensive coordinator Joe Woods earlier in camp and left him jealous of the locks, saying that he would donate his locks to his coach whenever he gets around to a haircut.

.@sila_SK_elly's mullet might encourage DC Joe Woods to grow out his hair 😂 pic.twitter.com/T00vXBeKtR

But it doesn’t appear that a haircut is coming any time soon.

#Browns LB Silas Kelly out here competing for a Best Training Camp Hair award, which I just made up but should totally be a thing. pic.twitter.com/0MQAEQNIaa

For Kelly to make the roster, he simply has to do what he does. The tape is there, and the athleticism — and hair — are off the charts.