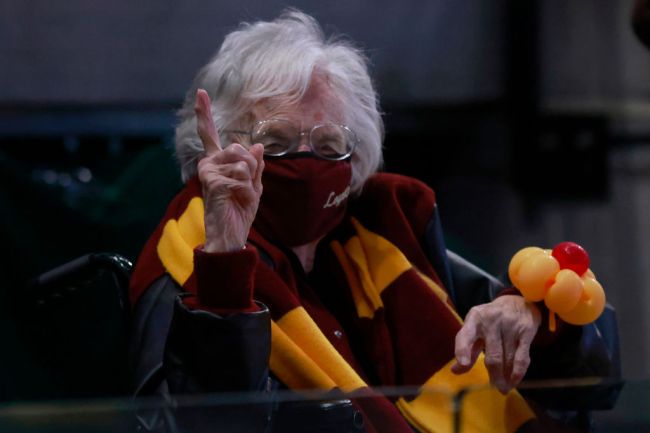 Sister Jean knows what she’s talking about. Loyola Chicago’s 101-year old team chaplain has become something of a folk hero over the past few years. She was 98 years old when her Ramblers made an improbable run to the Final Four of the NCAA Tournament in 2018 and she’s back again. After receiving both COVID-19 vaccinations and being cleared to travel, she arrived in Indianapolis with hopes of going all the way in 2021.

The @marchmadness content we've all been waiting for 😍 pic.twitter.com/lHo6GsHweA

If you thought that the team’s success was rooted in a belief in a higher power, you would be right, as the university is a private Jesuit school. However, it isn’t all blind faith. Sister Jean revealed on Saturday that her pregame prayers incorporate a well-thought-out, analytics-driven scouting report.

Sister Jean includes a scouting report in her prayer before each game. Legend 👏pic.twitter.com/QWxcKaEmNO

When her team was about to take the court against the No. 1 overall seed, she prayed over the Ramblers with a very-specific, game-oriented message.

“As we play the Fighting Illini, we ask for special help to overcome this team and get a great win. We hope to score early and make our opponents nervous. We have a great opportunity to convert rebounds as this team makes about 50% of layups and 30% of its three pointers. Our defense can take care of that,” her invocation included.

God answered her prayer. Loyola Chicago went on to upset Illinois and advance to the Sweet Sixteen behind senior Cameron Krutwig’s 19 points and 12 rebounds. He was a big part of the Final Four run in 2018 and continues to be an unstoppable force in the paint.

UNBELIEVABLE! The Ramblers take down 1-seed Illinois and Cam Krutwig is HYPE! pic.twitter.com/ax9PfN4fQZ

Cameron Krutwig was on a mission today 😤

Have a feeling Sister Jean is smiling right now 😀 pic.twitter.com/Vl0zkrlstg

Here’s another. They’re waving at sister Jean toward the end. pic.twitter.com/NRotTCPgvD

While the win was impressive, the manner in which it happened is pretty unbelievable. Sister Jean emphasized five key things in her pregame prayer and they all played out in the upset victory:

Sister Jean’s prayer was answered and the Ramblers looked dominant from start to finish. Fans were dancing all-over the Illini’s grave.

Loyola will try to continue their run against either 12-seed Oregon State or 4-seed Oklahoma State next weekend.