Sister Jean Gets Vaccinated-Up, Is Joining Loyola-Chicago Inside The NCAA Tournament Bubble 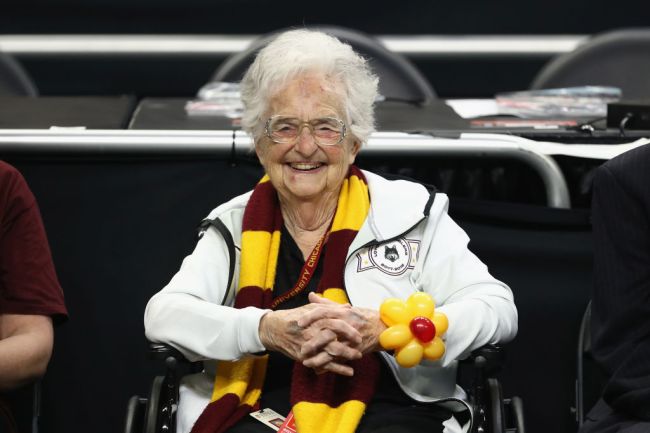 With Loyola-Chicago back in the NCAA Tournament for the first time since its magical run to the 2018 Final Four fans have been wondering whether or not team chaplain Sister Jean will be making the trip to Indianapolis. Sister Jean is 101-years-old now and given the fact that the pandemic is still ongoing, some may assume she wouldn’t be making an appearance, but those people would be wrong.

Sister Jean has received both doses of the Moderna vaccine and will be joining the Ramblers during March Madness.

Loyola confirms Sister Jean is ready to cut down some nets. The 101-year-old team chaplain and sports icon is headed to Indy for the NCAA Tournament. pic.twitter.com/T7IYmh38Y0

Considering health risks, Sister Jean has had to miss games throughout the season including Loyola’s run in the Horizon League conference tournament in St. Louis. The Ramblers knocked off Drake 75-65 to claim the conference title.

“I absolutely miss talking to them and being with them and praying with them,” Sister Jean told the Loyola Phoenix about missing games this season. “When I’m with them [in-person before games] and they go off on the court, I do make a sign of the cross on their hands before they go out there. It’s a wonderful tradition, things that we’ve had, and I hope we don’t lose them.”

With not being able to attend games, Jean was giving her pregame prayers over a speaker phone in the locker room, but now she’ll be able to join her team in Indy hoping for another deep run in the tournament.

The eight-seeded Ramblers take on nine-seed Georgia Tech in the opening round of the tournament on Friday.