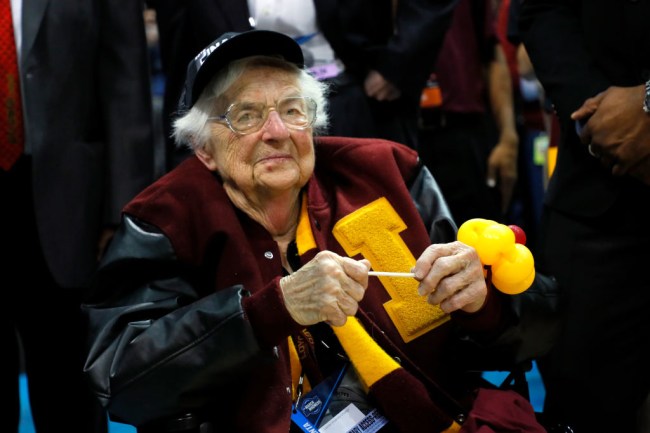 With all the positive media attention she’s gotten in the past two weeks it was only a matter of time until Sister Jean received a bit of backlash from the Internet.

Earlier today, the nun who has been Loyola-Chicago’s unofficial mascot throughout their unprecedented NCAA tournament run held a press conference and delivered a pretty spicy take on why God loves college basketball more than the NBA.

One of those reporters asked if she, a 98-year old nun, thought that God was a basketball fan. And her response, much like Loyola’s Cinderella run, was priceless.

“He probably is,” the Loyola team chaplain said. “More NCAA than NBA.”

Sister Jean elaborated on why, saying that college players are playing ““these young players play with their heart and not for financial gain.”

After the press conference this picture comparison of Sister Jean’s media presence vs that of of Loyola player Marques Townes went viral.

Of course the Internet backlash of Sister Jean has begun because it was inevitable.

This is so sad. Sister Jean has taken all the attention away from the only ones who really matter. https://t.co/qKbygznkFW

Pretty sure god would prefer athletes being paid than being exploited.

Liviticus 28:13: “It is good and right that the young shall not be paid for their labors, and instead that the polo-wearing jackasses make billions.” https://t.co/HJew2n5Cs6

exploitation of athletes is the holiest of virtues

I originally posted this on Tuesday. A reminder to the media that Loyola's players deserve (at least) as much love as they're giving Sister Jean. Had to update it since no one listened. Remember the Ramblers https://t.co/fN1zrw3qDT

I don’t believe Sister Jean was being malicious with her “God loves college basketball” quote or when she took the spotlight away from that Loyola kid but man it’s not a good look. Hopefully she talks to the media again before the game so it’s not a huge cloud hovering over Loyola tomorrow.