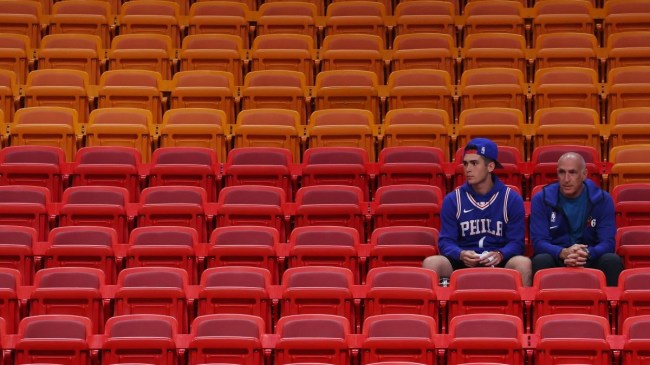 Contrary to popular belief, social media accounts for massive sports franchises are not, in fact, run by interns. Not only are these accounts run by professionals, but the content that they produce is often the result of weeks, if not months, of planning.

Then there’s the Philadelphia 76ers.

The Sixers once had one of the best social media teams in the entire NBA. It was full of intelligent, creative people who regularly produced fantastic content like the tweets below.

But intelligent, creative people are highly sought after in the social media field and in the world of sports. Unless, of course, you’re the Philadelphia 76ers. Instead, former Sixers social media stars have left and excelled with other organizations. Charlie Widdoes and Sandro Gasparro now work with the Brooklyn Nets in senior roles. While Kurt Gies serves in a similar role with the Los Angeles Rams after a stop with the Clippers.

The Sixers, meanwhile, are left with slop.

The 76ers social team put out a harmless enough graphic on Thursday morning laying out the team’s upcoming home schedule. Not only does the graphic get the schedule wrongly, falsely stating the Sixers game against the Raptors is at home. But it also’s completely unreadable unless you’re two inches from a computer or phone screen.

some good ones coming 🆙

Whoever thought the idea of white text on a white background was a good one may want to reevaluate their career choice. But honestly, it’s a collaborative ever. Posts like that often go through multiple sets of eyes before being approved. Though who knows if that’s what happened here.

Sixers fans were not at all happy about the graphic.

If someone hadn’t pointed out the white on white text I never would have noticed https://t.co/N3l5lmxRxK

Who picked that color font and have they been fired yet? https://t.co/PggQJVdk0v

Sitting here wondering why everyone is having trouble reading this very bright and easy game schedule. Before realizing that I haven’t seen start times or opponents. Just days of the week 🙃 holy hell https://t.co/1Ah5nUyB48

But hey, maybe awful graphics are just a Pennsylvania sports thing. Because Penn State has had its fair share as well.