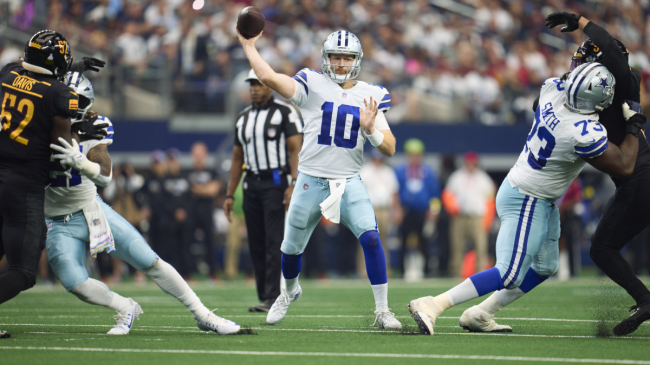 Cooper Rush led the Cowboys to another victory, beating the archrival Commanders 25-10. Rush threw for 223 yards and a pair of touchdowns to guide the Dallas offense to another big day.

Since taking over under center, Rush has posted three consecutive 200-yard games. The Dallas offense is averaging 23 points an outing after scoring just three in the season opener with Dak Prescott. Rush has yet to throw an interception, and most importantly, he’s led the Cowboys to a 3-0 record.

Those wins came against a talented Bengals team, as well as divisional foes New York and Washington. While things looked bleak after that Prescott injury in Week 1, now, Dallas sits near the top of the NFC East standings.

Prescott was injured in the season opener against Tampa Bay, leading to a brief absence from the starting lineup. Now, though, that time on the sidelines is almost through as the passer eyes a Week 5 return to the field.

Many in Dallas don’t want to see Rush lose the starting role as the team seems to have rallied around the youngster over the last three weeks. One of the Cowboys’ most notable fans, Skip Bayless, feels sorry for Dak, posting the following video on Twitter after the big win.

“Man, I tried to tell you about Cooper Rush. Now, I feel sorry for Dak Prescott. I can’t wait for Undisputed tomorrow.”

The clip came along with a caption that read, “Cooper vs. Dak.”

Is Prescott really in danger of losing his job with Rush’s performance over the last three games? It would certainly seem difficult to unseat the starter after leading the Cowboys to three straight wins.

Then again, Prescott did throw for nearly 4,500 yards last season while leading the team to 12 wins. If he’s ready to roll, he’ll likely get the nod.

Still, it’s a welcomed quarterback controversy for Dallas supporters as many had written off the Cowboys following that Week 1 injury.