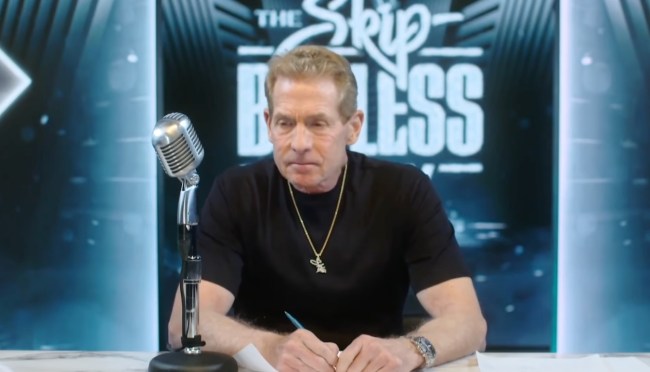 Skip Bayless has been a sports reporter and personality on television since the late 80s. We’ve all watched him rant about sports far too many times than we probably care to admit for many, many years at this point.

While it’s no secret that Bayless loves what he does, you would think we’d hear more about his personal life given his following and the spotlight that’s followed him all these years.

It turns out that keeping things hush-hush about his personal life is by Bayless’ design.

During episode three of Bayless’ new show cleverly named ‘The Skip Bayless Show,’ he opened up about his personal life, not having children, failed relationships, and his current marriage. He brought up the topic to explain how much respect he has for Tom Brady being able to balance family life along with his career and lifestyle.

“I chose in my 20s, as I was coming up in this business, to not have children,” Bayless explained. “I married not my high school sweetheart but my junior high sweetheart and one reason we didn’t make it was I knew she wanted kids and I knew the deeper I got into my career, I just couldn’t have kids.”

“Then, after that relationship ended, my first marriage, I had a longer-term relationship with another woman and in the end, she just had to have children. I said, ‘I can’t.’ I tried to get there and I couldn’t get there.”

“I’d be a horrible father. I’d be as horrible a father as my father was for other reasons and I wasn’t going to inflict that on kids. Not fair, not worth it, no.”

Bayless, 70, did find a life partner during his journey toward the top of the sports world, his wife Ernestine. He didn’t mess about, however, as he explains that he told her on their very first date that she would never be as important to him as his career.

“Then I met my wife, Ernestine, 17 years ago in New York City. On our first date, as she will attest, I said ‘hey, if this happens to go anywhere, I’m sorry but I’m declaring myself upfront, you’ll always be No. 2 to my job, which is my life.'”