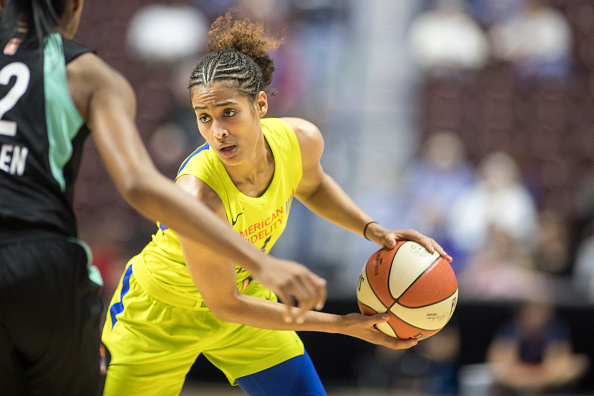 Last month, WNBA star A’jai Wilson caused a firestorm when she took to Twitter to advocate for better pay for women in professional sports after LeBron James signed a monster deal with the Lakers.

Lolololol ohh it’s about skill set? 🤔 because I heard a bench player gets paid more than …nvm 😶 https://t.co/Q41UsxKthZ

Before I continue, can we just take a minute to enjoy that dude’s Twitter handle? Solid name, Mr. McCuck

Yesterday, Skylar Diggans-Smith became the latest female basketball star to call out the WNBA over their wage pay gap with the NBA and she used Harrison Barnes as an example while doing so.

I’m the highest paid player on the Dallas Wings, and my salary is in the low six figures. [Harrison Barnes, the highest paid player on the Dallas Mavericks, made $24 million last season.] He’s definitely younger than me. Do you know his stats? Was he an All-Star? I mean, it doesn’t matter. But last year, I was First Team All-WNBA, which only goes to five players. I was also a WNBA All-Star for the third time.

Diggins-Smith and other WNBA players are currently pushing for a similar revenue split that their NBA counterparts get.

Players in the NBA get about 50% of the revenue. For women, the percentage is in the twenties. So before we even talk about base salary or anything like that, we don’t even get paid the same percentage of the revenue that we bring in, which is kind of unbelievable. People try to hijack this issue and say that women’s basketball may not be as interesting a game, because they disparage women in sports, period. But we don’t even make the same percentage of revenue! And jersey sales…we don’t get any of it. The men do. And I have had a top-five jersey for three or four years in the WNBA.

While several NBA fans have criticized Diggins-Smith over her stance, Mavs owner Mark Cuban is supporting her fight for better pay in the WNBA.

I'm ok with @SkyDigg4's approach. Sometimes you have to get loud to go forward. https://t.co/1LjES7Rbe4

In the end the fact of the matter is the WNBA players union has to fight for better pay during their next CBA negotiations in 2021.