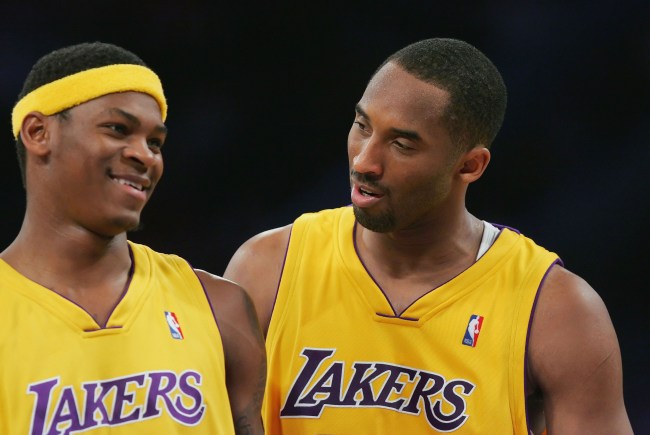 Smush Parker may be the bravest person to ever wear a Lakers uniform, and that’s saying something considering a future Laker once tried to fight an entire stadium crowd at The Palace in Auburn Hills.

But picking a fight with a few thousands average schlubs pales in comparison to taking on a basketball deity.

Smush Parker played two of his five seasons in the NBA as the point guard of a bad Lakers team that Kobe Bryant viewed as a skid mark on his legacy.

After the Lakers let Smush walk in 2007, he did an interview two years later ripping Kobe’s failure to motivate the team and went as far to call the five-time NBA champion “overrated.”

“The reason why I say overrated is because everybody thinks that playing with Kobe Bryant is the best thing since sliced bread, when it’s not,” Parker added.

Smush also claimed that Kobe instructed him not to talk to him in practice.

Kobe waited until 2012, when Parker was out of the NBA and playing in the Dominican Republic, to deliver a knockout punch.

And then there was this:

"He's in China right? Wish him the best of luck. Maybe he'll get back to the NBA & can see what it's like up close again" 😭😭😭 Didnt take this nigga serious omg I'm so weak https://t.co/1wi31Bgw0k pic.twitter.com/PYNcsI68hJ

The two went back-and-forth for a bit before things tampered down, but the former teammates never made an effort to reconcile before Bryant’s death.

The 38-year-old Parker spoke to TMZ about having regrets about never burying the hatchet with his nemesis.

“I was hoping for an opportunity to really sit down or our paths to cross so we could physically and verbally have a dialogue.

There was a lot of underhanded shots that were fired from both directions. It’s unfortunate that I’m not gonna be able to get that opportunity now.

Pretty powerful words from Smush about the importance of self-reflection and reconciliation. To be honest, I’m kind of surprised since his initial Twitter tribute took a turn halfway through.

File this one life lesson: Let Go Of The Petty Shit.