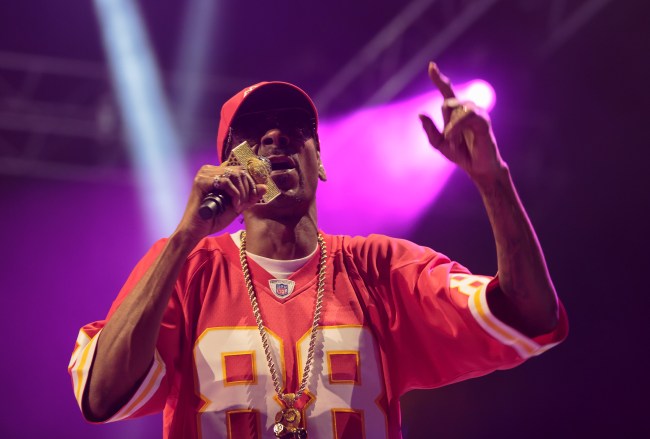 College basketball season is right around the corner, which means students across the country will be consuming copious amounts of alcohol to get enough of a buzz to sustain themselves during the various late-night ceremonies schools put on to usher in the new campaign.

This includes the University of Kansas, which celebrated its 35th annual Midnight Madness event—dubbed “Late Night in the Phog”—last Friday.

More than 16,000 people flock to the absolutely packed Allen Fieldhouse to ring in the new year and were greeted by the one and only Snoop Dogg, who was recruited by the school to help bring the house down.

However, they got a bit more than they likely bargained for, as Snoop opted to bring out some stripper poles and money guns during his uncensored performance.

A number of people weren’t exactly thrilled with the rapper—including Kansas athletic director Jeff Long, who issued the following statement to address some of the backlash:

“We apologize to anyone who was offended by the Snoop Dogg performance at Late Night.

We made it clear to the entertainers’ manager that we expected a clean version of the show and took additional steps to communicate to our fans, including moving the artist to the final act of the evening, to ensure that no basketball activities would be missed if anyone did not want to stay for his show.

I take full responsibility for not thoroughly vetting all details of the performance and offer my personal apology to those who were offended. We strive to create a family atmosphere at Kansas and fell short of that this evening.”

While Long may have regretted his decision to invite Mr. Dogg to campus, the Compton product made it very clear he won’t be apologizing any time soon during a chat with Howard Stern, where he said:

“The audience enjoyed that shit. I don’t know what the fuck they talking about…

I think it was more the publicity of what I did. they had to cover it up. And, I respect them, and I wasn’t gonna put no smut on their name and say they did anything wrong because they invited me to come do what I do.

When you pay for Snoop Dogg, you gon’ get Snoop Dogg.”