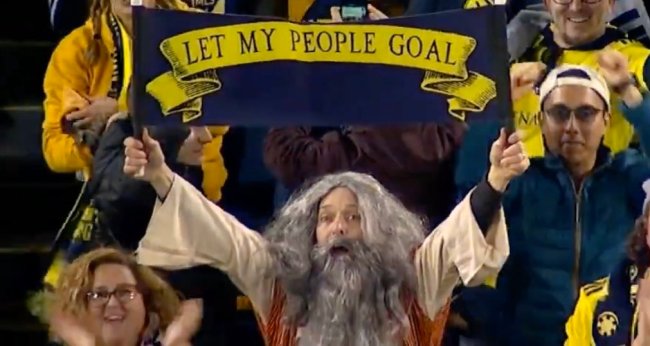 It came to pass that the capital city of Tennessee was awarded a professional soccer team in 2018. It was to join the MLS in 2020.

And lo, on the day of its arrival to the highest level in American soccer, a robed figure appeared, adorning the finest wig and beard known to man. He had but one message to declare to the masses.

Should an opposing player be called for a foul or given a red card, he reminds those in attendance that “Thou Shall Not” and “parts the S.C.” fans, much like Moses “parts the Red Sea.”

FOLLOW @BROBIBLE ON TIKTOK AND JOIN US ON MORE ADVENTURES AND EXPERIENCES !!!

A stranger in a foreign land.

Mason’s backstory makes him that much more interesting.

Prior to donning his matchday outfit for the first time, he the lead guitarist for the multi-platinum, Grammy Award-winning rock band, Jars of Clay for 20 years.

You may have heard their song ‘Flood.’ Mason’s talent led Soccer Moses to play Nashville SC’s traditional “guitar riff” ahead of his team’s home match on July 3rd.

In 1997, Jars of Clay went to London and recorded their second album. The sound engineer was a huge Arsenal fan and took the band to a game at Highbury.

That is where his love affair with the sport first began.

“There was a streaker at halftime and we’re in the terrace stands there at Highbury which are wooden, and it’s just vibrating and it is equal part terror and elation. I mean I can’t even describe it,” Mason said to the MLS. “I just fell in love with the sport. It’s the disease that wakes me up at 5:30 in the morning to watch Swansea and Leicester.”

Just short of 20 years later, Mason qualified as a master barber and opened his own shop in Music City. Not long thereafter, Mason’s friend invited him to a Nashville FC (the club’s name prior to its MLS expansion) game.

At some point in the evening, Mason found himself playing a drum in the supporters section.

“’I’m a big fan of pageantry and, you know, give me liturgy, some symbolism and some chants and songs and I’m in,” he said to the MLS. “That awakened something for me on a local level that, when we went into the USL, I saw an opportunity, which is rare these days, to start something on the ground floor.”

One day, a capo and vice president for NSC’s supporters’ group was in The Handsomizer’s barber chair. He told Mason a story from the time he watched the World Cup at a bar.

Nigeria’s Victor Moses scored a goal in the match and the capo’s friend yelled “LET MY PEOPLE GOAL!”

Having heard the story, Mason decided it was time bring Soccer Moses to life. And he did.

Two days after Mason made his debut as Soccer Moses at Nashville SC’s first match, a tornado tore through much of the city. Mason, who was traveling to the club’s first road game in Portland that next weekend, decided to use his newfound fame as a way to raise money.

Upon investigating how he could help, Mason learned that the Timbers were already donating $15 from each general admission ticket to the relief efforts. Soccer Moses wanted to say thank you.

“It was funny and it was all goodwill,” Mason said. “At one point all their keys started jingling and they started singing “Go home, Moses.” I mean, it was the best thing ever.”

After Soccer Moses shredded the opening riff and the clip went viral, European fans reacted as if it was the plague.

this is why americans shouldn’t be allowed to play football.. https://t.co/U6AT57ZWoj

What in the Star Spangled Banner is this bullshit? https://t.co/dCJbVV6ZUh

As the game of soccer continues to grow across the United States, Soccer Moses is everything that is right about the game. Mason’s fandom is the perfect example of how the sport should look and the hatred from across the pond should only further exemplify such.