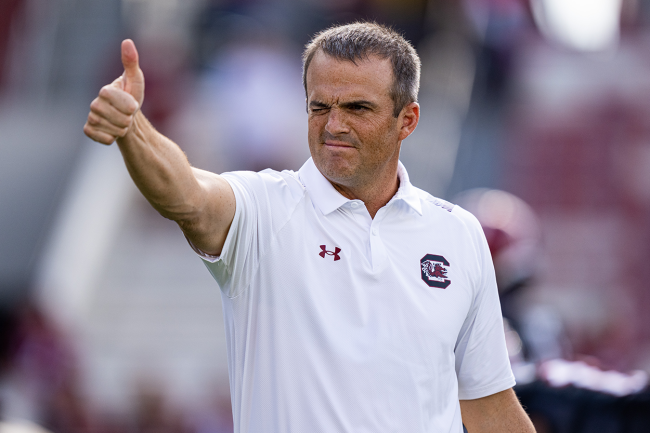 South Carolina head football coach Shane Beamer does not have time to waste on what the family of his players are saying on social media. The 44-year-old made it very clear that he has bigger priorities in a recent press conference.

Late last week, a report surfaced about new Gamecocks quarterback Spencer Rattler and his previous interest in a potential move to Arizona State. Not long thereafter, ESPN host Matt Barrie insinuated that the possibility of Rattler playing for the Sun Devils fell apart because of Name, Image and Likeness.

Barrie implied that Rattler and his camp were asking too much for ASU. In response, Rattler’s father Michael was quick to shut down any such rumors.

Barrie doubled down, but Michael remained adamant that NIL had nothing to do with the decision not to attend Arizona State. He also went so far as to say that Barrie was just manufacturing drama.

On Monday, Beamer was asked about the exchange.

SportsTalkSC reporter Phil Kornlut asked the South Carolina head coach if Rattler’s father’s presence on social media, “good and bad,” is something that he has to keep an eye on. Beamer, visibly irritated by the question, proceeded to tee off.

“Good and bad, those are your words … I mean some people may not think, I don’t know what he’s doing on social media, but I don’t think it’s much of anything. I think his dad is a hell of a person. I love his dad. It’s a great family. Spencer’s very, very, very, very, very, very grounded and a great young man. Looking forward to you guys getting to know him. That’s what I know about him. He’s done a great job of coming into this program, immersion himself within the team and being a great teammate.”

When another reporter tried to move on and ask a different question, Beamer interrupted and circled back to Kornlut. He was not having it.

“But really, we’re asking about dads of players? C’mon man. I mean, I’ve got 119 dads and moms. Are we going to comment on what all of them are putting on social media?”