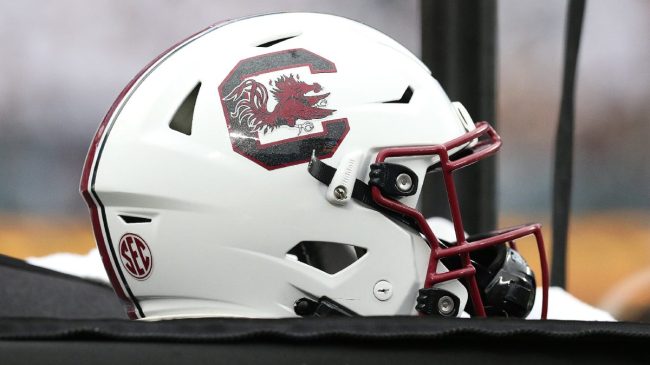 And there’s a lot to be excited for if you’re a Gamecocks fan. Last year, the team was able to win seven games, crushing rival North Carolina in the Duke’s Mayo Bowl.

Over the offseason, the program picked up even more momentum, landing a key commitment from transfer Spencer Rattler. Rattler, who comes from Oklahoma, should be an immediate upgrade in the quarterback room as the Gamecocks were forced to play four different starting signal callers last season.

On Saturday, fans got their first glimpse of their new passer, as well as the rest of the 2022 squad.

While Rattler earned the headlines for his performance in the contest, it was a postgame celebration that is turning heads on social media.

The South Carolina running backs room decided to show off their athleticism after the Spring Game, holding their own backflip competition in full pads.

What a flippin’ night at Williams-Brice pic.twitter.com/B4p5Lr2Qlh

First, you’ll see No. 1 Marshawn Lynch, who is just two years removed from an ACL tear. That’s some impressive explosion with all things considered.

Then you’ll see No. 8 Christian Beal-Smith, who transferred in from Wake Forest, followed by No. 21 Juju McDowell, who I think wins the competition. Finally, No. 14 Lovasea Carroll joins in, getting a little help from his teammates.

The insane athleticism had folks talking on social media.

Ever look at D1 athletes on TV and have that little thought of 'Oh I could do that' … Well here's pretty much the entire RB room easily cutting standing backflips in full pads. Just a completely different level of athleticism to play at that level https://t.co/EB0VgCPfbk

@m_lloyd_2 is contagious. Remember him doing a backflip when he arrived on campus. https://t.co/tdCZqj6MYD

McDowell with the standing gainer!🤯 https://t.co/nMtHGEBMFr

The Gamecocks will hope that these backs can help win some games in 2022. If this kind of explosion carries over into the games, South Carolina could have a surprising bunch.