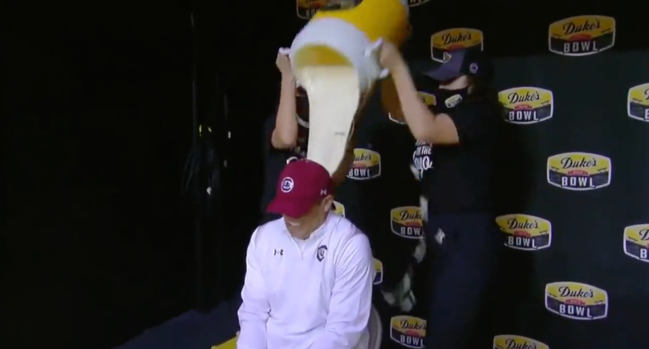 We have seen smoothie baths, french fry baths, and Cheez-It baths, but nothing compares to what happened on Thursday.

After the Gamecocks beat their cross-state rival North Carolina Tarheels, they earned the honor of calling their state Carolina until the next meeting. They also earned the greatest honor of bowl season— dumping mayonnaise upon the head of their head coach.

Last season, people were incredibly disappointed by the lack of mayo bath after the game. This year, the game made a promise.

If Beamer and Mack Brown agreed to have mayonnaise dumped on them, the Duke’s Mayo Bowl would donate $10,000 to the winning head coach’s charity of choice. Both coaches agreed, and Brown even said he would be willing to get by a frying pan if it meant that his team won a game.

At the end of the day, what Brown said did not matter. His Tarheels team, which began the year as ACC Coastal favorites, finished the season at 6-6 and got whooped in the bowl game.

As a result, it was Beamer who got the honor.

Prior to the game, it was reported that it was exactly 4.5 gallons of mayonnaise to be dumped. However, to get it to dump properly, it had to be watered down just a little bit.

SOURCES: The mayonnaise dump on the winning head coach will be after the trophy ceremony and it will be 4.5 gallons of Duke’s mayonnaise, slightly watered down. @DukesMayoBowl

But not to worry, the game practiced the dump all week. It was prepared.

As the game clock wound down under five minutes, the mixture was put into the cooler.

After the clock struck zero, Beamer was bathed— in Gatorade. He got a sugar water pre-rinse prior to the mayonnaise.

And then, after all of the anticipation, Beamer had mayonnaise dumped alllllllllll over him and it was beautiful.

Here’s another look at the glory:

Will Beamer ever eat mayonnaise again? Maybe not. Was it worth the win over UNC? Absolutely.