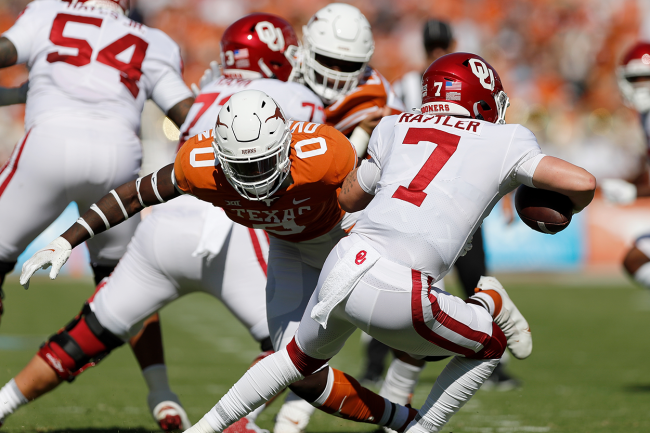 Spencer Rattler spent the first three years of his college career at Oklahoma in the Big-12. Now, as he hopes to elevate his NFL Draft stock with one last season in college, the former five-star recruit is finishing things out at South Carolina in the SEC.

That is quite the adjustment, especially for someone who spent the vast majority of his life growing up in Arizona. Not only will Rattler have to adjust to the lifestyle of the South, but he has to get used to the difference in competition.

The SEC is the crème de la crème in terms of college football and Rattler has his work cut out for him. He knows that.

In a recent interview with 247 Sports, Rattler spoke on the difference between his previous and current conference. While doing so, he took a shot at the Big-12 over their lack of defensive prowess. It was indirect shot, because he was referring positively toward the SEC, but in doing so, he threw shade at the Big-12.

“Different environments, going against serious defenses, definitely gonna have to prepare for that. I’m excited for the opportunities. Big-time stages every Saturday. And it’s just football at the end of the day, so we’re gonna go out there with a game plan and hopefully execute.”

Again, it’s not what Rattler said, it’s what he didn’t say. He called the SEC “serious” defense, which would infer that the Big-12 is “unserious” defense.