Spencer Rattler Has Officially Arrived At South Carolina And Is Already Putting In Work To Get Stronger, Faster 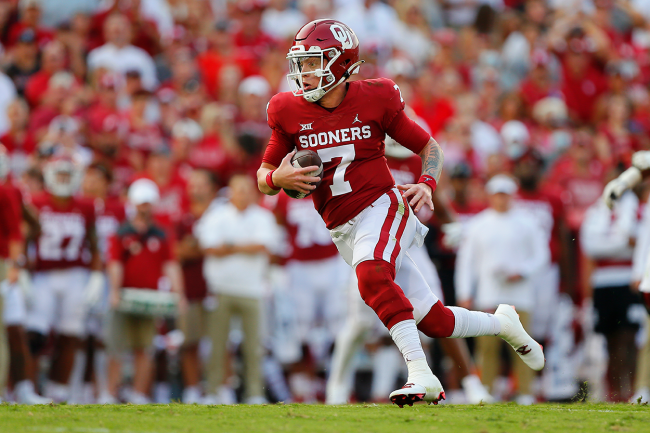 Spencer Rattler’s new chapter has officially begun. The former five-star recruit, who transferred to South Carolina during the offseason, officially arrived on campus in Columbia earlier this week and is already getting that work in.

New photos from Gamecocks New & Creative Media Intern Alex Marinelli show the 6-foot-1, 205-pound 21-year-old going through workouts at the team facility on Thursday. He was getting reps in with the resistance trainer and weight sled.

Earlier this week, head coach Shane Beamer spoke about Rattler. He also talked about the importance of having him on campus already. It allows him to get a head start.

“Because of that, the quarterback position. Just because it’s such a leadership position and developing that chemistry with the receivers and tight ends and running backs and the offensive line and the entire team. And then just for any position, just to be able to you know get guys here and you know the one of the reasons we had a lot of had the success that we had last year was because so many of these transfers came in and we were able to develop a really tight team by the time we got to the season. They got tighter as the year went on and the more time that you have together the better chances you have of doing that. “

Rattler will go through spring practice at South Carolina, where he joins a quarterback room that also includes Luke Doty, Colten Gauthier and Braden Davis.

Doty is a former four-star recruit, Gauthier is a three-star and Davis is also a three-star. In addition, four-star freshman Tanner Bailey will also join the team over the summer.

Rattler is expected to be the starter on a one-year rental, especially after arriving on campus early. However, the QB1 role will not be given to him and he will have to show why he deserves to be under center in Week 1. He will be able to do so throughout the spring practice period and summer ball.