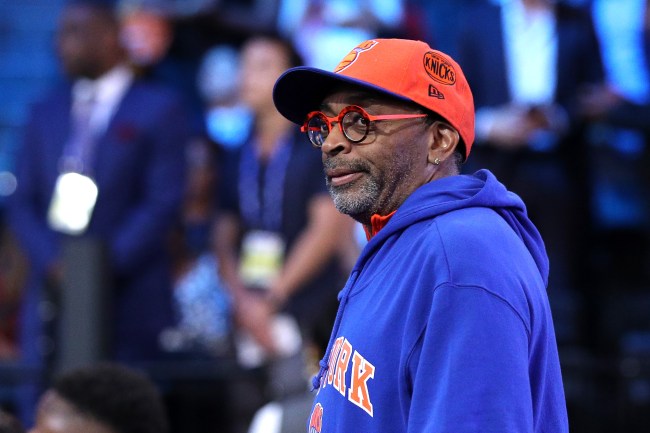 The James Dolan-Spike Lee drama is beginning to spiral out of control.

The whole thing started when MSG security told Lee that he couldn’t enter through the media entrance anymore.

The Knicks then released a statement claiming Lee had hashed things out with James Dolan and the took shook hands in agreement. Lee called the statement a lie and claims that he had never shaken Dolan’s hand.

The part of the Knicks’ statement that Lee said was untrue: Owner Jim Dolan and Lee shook hands and were smiling. “I wasn’t shaking hands, in fact when he came over I didn’t get up right away… I said Mr. Dolan, I’ve come in the same entrance 28 yrs. Why wasn’t I notified?”

More Knicks on Spike Lee: "It’s disappointing that Spike would create this false controversy to perpetuate drama. He is welcome to come to The Garden anytime via the VIP or general entrance…not through our employee entrance"
MSG has a photo of Spike & James Dolan shaking hands https://t.co/oF7QmVzplq pic.twitter.com/g7FFYHNDBI

During a text interview with NY Times Sopan Deb, Lee acknowledged he may have shaken Dolan’s hand but that the picture released on Twitter was planned by the Knicks to make him look bad.

MORE: Spike Lee just texted me to say that he thinks he was "set up" with the handshake photo.

This is turning out to be a really odd Super Tuesday. pic.twitter.com/ALQAMBEVpF

Hopefully, this controversy goes away soon because it’s starting to get real petty and dumb.