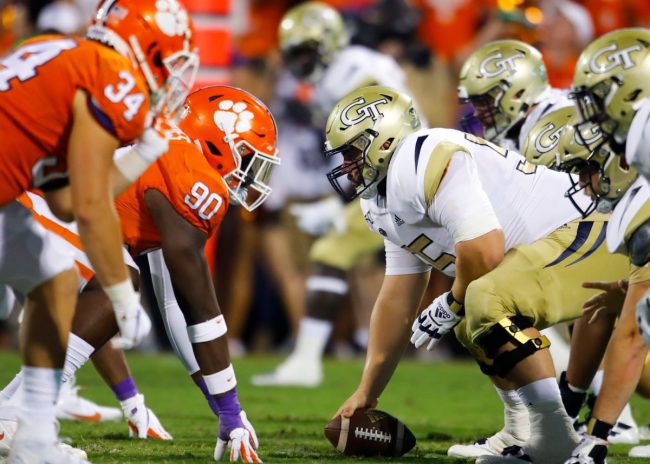 College football fans have their first official upset pick of the season. At least the first one that matters.

Diego, a sea lion at the Georgia Aquarium, has given his choice for the upcoming Chick-fil-a Kickoff game between the hometown Georgia Tech Yellow Jackets and ACC rival Clemson.

The sea lion picked Georgia Tech to pull the upset over the Tigers and land college football’s first major surprise of the year. The Week 1 matchup will be played on Labor Day, September 5th, spotlighting the contest as it will air on Monday in primetime.

Now, there are many different strategies to use when making your sports bets. Some like research and analytics. Others go off of feel. Some just throw a boatload of cash down on unpredictable outcomes and hope for the best.

But fans think they’ve got a surefire upset bid with Diego’s latest choice.

Clemson enters as a three-score favorite, expected to beat the Yellow Jackets handily in the opener. But last year’s outing proved that this game can be closer than the experts think.

Georgia Tech played tough with the Tigers, eventually losing 14-8 in Death Valley. The Yellow Jackets had a chance to tie the game in the final minute but were stuffed on a fourth and goal play at the two-yard line.

Diego apparently thinks Tech can stand strong again with the contest being played in Atlanta. And with that pick officially in, many are ready to bet the bank on the Jackets.

Many degenerate sports bettors are just looking for a sign to push them over the edge when making their picks. Diego the Sea Lion has given them just that. It looks like a number of gamblers plan to take the Yellow Jackets in the upset bid.

Does anyone know his stats in predictions? This may decide whether or not I put my mo this rent on a Georgia tech bet

great insight, going to leverage the house for this bet. thanks sea lion

Maybe there’s a method to the madness.

Sure, some might say it's a homer pick, but Diego's done his research and is clearly adopting a wait-and-see approach with regard to the visitors' staff turnover, particularly on defense. https://t.co/lgaBGxMe3g

As much as I’d like to see the chaos, I think I’ll stay away from Diego’s pick. He’s likely a bit biased and the last time Clemson came to Atlanta, they beat the Jackets by 66.

In fact, they’ve won each of their last three games vs. Tech on the road by at least 19 points. That three-score spread is looking better and better by the day.