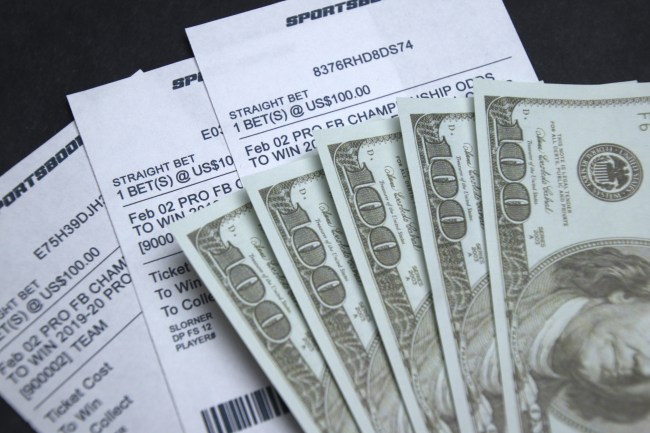 I’ve never been much of a lucky sports gambler, as nearly every time I bet something on the games we all love, I lose serious money. Sure, there was that one time I won a paltry $25 or something, but, c’mon, for someone who’s obsessed with sports, you’d think I’d have a little bit better luck and know what the hell I’m doing. Such is the life of a rookie in the sports gabling world, though.

While I have (yet?) to win big when gambling, there are plenty of people I’m envious of because they’re actually good at it. Obviously there’s a ton of luck when someone wins hundreds of thousands of dollars by betting on sports, but, if you’re a regular sports gambler, at least you understand trends and tendencies of teams — which can be helpful when trying to win big.

That must’ve been the case with some lucky sports gambler last weekend, because, according to Action Network’s Darren Rovell, someone racked up an enormous $144,000 payout on a wildly gutsy $800, 8-leg parlay — which involved all of the games in the NFL Playoffs. Just take a look at the winning ticket below.

One of the greatest parlay wins of all time occurred this weekend at the @WilliamHillUS sportsbook at @IsleCasinoBT. An eight-leg, $800 parlay, which won both spreads and totals, and netted $144,000. pic.twitter.com/H8LBNJsLIF

It’s wild to think this sports gambler confidently walked up to the window and laid down $800 hoping all this would come true, but it’s a pretty big dick move that it paid off. Imagine his or her friends trying to talk them out of doing something this extreme — which, for all intents and purposes, was like throwing cash down a sewer — only to have it actually come to fruition. Yeah, that’s got to be a cool feeling.

Some people just have all the luck, so here’s to all those lucky sports gamblers out there who will earn thousands betting on sporting events this upcoming weekend — because I’ll just sit back, be jealous and just hope to win the lottery or something.