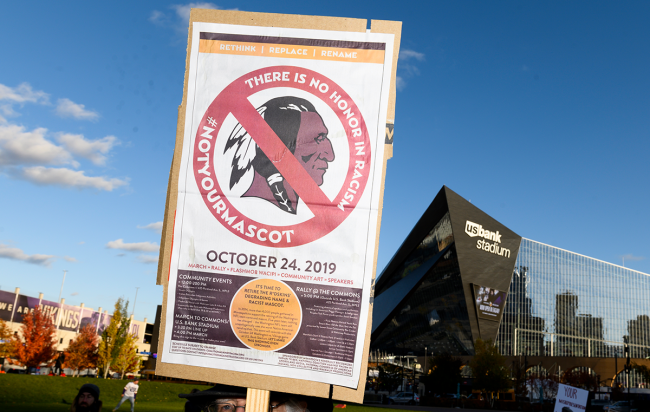 Last month, the Cleveland Indians announced that they had decided to change their name due to concerns over cultural sensitivity, making them the latest franchise to abandon a moniker inspired by North America’s original inhabitants after the squad now known as the “Washington Football Team” and the CFL’s Edmonton Eskimos went the same route.

It seemed fairly inevitable and was honestly a long time coming, and while the people who made these decisions aren’t going to get the Nobel Peace Prize some of them seem to think they deserve based on how hard they’ve patted themselves on the back, these moves are probably for the best.

There’s no telling how the Team Formerly Known As The Indians plans to reboot, but it’s safe to say it will be close to impossible for them to go with something more generic than the NFL’s most controversial team did when it rebranded. Regardless, it’ll be intriguing to watch what direction Cleveland chooses to go in as they enter a new era; it’s sort of like when Constantinople became “Istanbul” only with infinitely less historical significance.

Speaking of history, it’s safe to say it’ll take some time to adjust to whatever moniker and logo they opt to go with, as it usually takes a while to get used to things whenever a team rebrands for reasons that have nothing to do with political correctness. As our very own Francis Ellis noted last year, there’s no telling how many other organizations may come under fire for similar reasons, but there are more than a few who need to do some self-reflecting—not because their name is offensive, but because it’s offensively awful.

With name-changing currently all the rage, it’s a good time for some others to jump on the bandwagon because the one they have objectively sucks. I don’t necessarily have any suggestions concerning what the teams below should go with instead, but everyone knows the entire point of the internet is to complain about things you don’t like without bothering to offer any solutions.

You don’t really have to think too hard when it comes to figuring out why most teams tend to have a name that’s somewhat threatening and suggests they’re a force to be reckoned with. However, the same can’t be said when it comes to figuring out why there’s a professional hockey team named after a mild-mannered waterfowl whose only real terrifying quality is the abnormal shape of its penis.

The worst part is that Anaheim willingly abandoned the truly immaculate nickname they had when they first entered the NHL: the Mighty Ducks of Anaheim (I’m not sure why teams based in that city take a page out of Yoda’s syntax book when it comes to how they’re officially referred to, but that’s an article for another day).

Now, I can understand why the organization wanted to wash off the stink of the Disney franchise responsible for one of the most impressively shameless displays of corporate synergy you’ll ever encounter. I also get why they may have wanted to distance themselves from the cringiest pregame ceremony known to man and a mascot that lit itself on fire when ownership dropped the “Mighty” in 2006.

However, they really shot themselves in the foot by failing to consider it was only going to take a few years before ’90s nostalgia took the world by storm, and based on how beloved the original logo and the wonderfully ugly “WIld WIng” jerseys they pull out every now and then still are, they might as well fully embrace the past now that they’re willing to acknowledge it.

Most Teams Named After A Type Of Cat

The city of Detroit is home to a couple of teams that pay homage to the city’s history, including the Pistons, who have a pretty dope name that also pays homage to their hometown’s storied auto industry. After doing some research, I discovered the Red Wings are essentially a bootleg version of Canada’s now-defunct Montreal Winged Wheelers, but the tire in their logo is still a pretty cool tribute.

Do you know what’s not cool? Teams that are named after cats, which anyone who’s watched The Simpsons knows is the most generic genus you can possibly use for inspiration.

However, Detroit has two of them in the form of the Lions and the Tigers, neither of which (at least to my knowledge) are native to Motor City. If this was an isolated example, I’d be willing to give them a pass, but sadly, that’s not the case.

There was presumably a time when cat-inspired names were somewhat original, but far too many teams need to stop clinging to the past. The Bengals got their name because Cincinnati’s zoo had a tiger, and when you consider that just so happens to be the same zoo where Harambe was tragically slain, “Gorillas” seems like a no-brainer.

We’ve also got a couple of Panthers, including the Carolina variety that was officially ruled extinct in 2018. There are also the ones in Florida, a state home to an estimated 100 panthers on the brink of meeting the same fate, which I guess is appropriate for a team that technically exists but doesn’t pose any real threat.

There are also too many college teams to count, which brings me to our next entry…

Around One-Third Of All College Teams

It feels like college teams just sort of get a pass no matter how objectively shitty their nickname is. I don’t know if they’re afraid to abandon tradition or are scared of pissing off their boosters, but the lack of originality on display around the NCAA is truly stunning.

The Cat Problem rears its ugly head again, but you’ve also got schools appropriating the warrior culture of the Aztecs, Trojans, and Spartans (say what you will about what Ole Miss decided to go with, but at least they can explain where “Rebels” came from). There are also Dozens of “Eagles” and their various derivatives, as well as far too many names containing “Fighting” as if that’s somehow a special quality as opposed to a trait you’d expect anyone competing in literally any athletic competition at the college level to have.

By now, it should be clear that all I’m really asking for is a little bit of originality, but it’s also possible to get too creative or fail to adapt to the times. Take the Wichita State Shockers, for example. In theory, it’s a nice callback to the students who used to earn money to pay for their tuition by harvesting—or “shocking”—wheat. In practice, it’s an archaic term that anyone under the age of 30 associates with something very different, so it might be time to rethink things.

According to the NBA’s website, the name was inspired by “the wise and magical nature of the team,” but I’m pretty sure the real explanation can be chalked up to everyone’s favorite literary device: alliteration (a strategy the Baltimore Bullets harnessed before making the move to Washington, D.C.)

Also, I know that bullets exist and wizards do not, but when you think about it, it’s not like the characters in Harry Potter prided themselves on pacifism. For every good-natured wizard who uses magic to make candy appear or turn their wand into a flashlight, you’ve got Voldemort and his followers casting spells to paralyze people and kill teenagers.

Maybe it’s time to rethink the name once again.

At the risk of pulling a Jerry Seinfeld, what’s the deal with all of these teams named after weather? Thunder is only scary if you’re a dog, there’s no real reason to be afraid of lightning when you consider the odds you’ll ever be struck by it, and while I know I said these proposed changes are unrelated to sensitive issues, going with hurricanes seems kind of disrespectful to all of the people killed by one.

Don’t even get me started when it comes to the Heat and the Suns.

Outside of the Big Four leagues, we’ve also got Cyclones, Blizzards, Storm, Freeze, and Fog. It’s a list that reads like Al Roker’s Christmas letter to Santa, who I like to think would feel the same way about the absurd number of weather phenomena that are listed.

Some of these names have also spawned mascots that don’t even make sense. The Lightning at least made an attempt by going with some sort of insect named “Thunderbug,” while both Hurricanes apparently just said “Fuck it,” as Miami went with an ibis and Carolina opted for a pig.

Do better, you guys. Do better.

New Orleans is a place absolutely teeming with culture, and the fact that its NBA team decided “Pelicans” was the best option is absolutely baffling.

They may be the state bird of Louisiana, but considering what the city they play in has to offer, I feel like whoever was responsible for the moniker was sitting in a brainstorming session he forgot to prepare for, and when his name was called, he panicked and saw a pelican outside a window and just blurted it out.

I can only assume this led to some executive saying, “Pelicans? I don’t like it…I love it!” Just like that, we got the worst team name the NBA has to offer—although there is another one who deserves some of the blame.

Prior to moving to Utah—a place that is the last state in America I associate with jazziness—the team played in New Orleans, so that name made a ton of sense.

However, instead of rebranding as the Utah Tabernacle Choir when they relocated, they’ve been squatting on the name ever since they headed out west in 1979. Part of the reason the Pelicans are called that in the first place is because New Orleans was nice enough to give “Hornets” back to the city of Charlotte, which wisely abandoned the cat-inspired name it had adopted in 2014.

Last month, the Jazz got a new owner when billionaire Ryan Smith bought the team, and while I’m not holding my breath, I can only hope he follows New Orlean’s example by giving The Big Easy what it deserves.