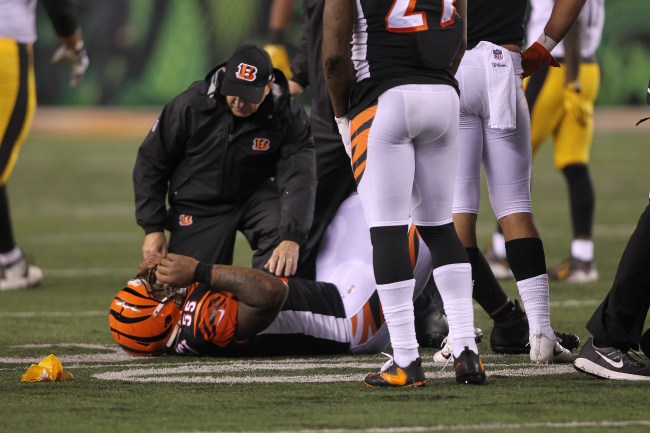 For those of you who watched last night’s Monday Night Football brouhaha between AFC North rivals Pittsburgh Steelers and Cincinatti Bengals, I hope you experienced less anxiety watching it than I did.

The Bengals racked up a team-record 173 yards in penalties and two players left the game on stretchers. The Steelers tacked on 66 yards in penalties for violations including FOUR unnecessary roughness penalties, and one a piece for roughing the passer, unsportsmanlike conduct and taunting.

The penalties were trivial when you consider the scary injuries suffered by players on each team, none more pressing than the injury suffered by Steelers linebacker Ryan Shazier.

On the first possession of the game for the Bengals, Shazier launched himself head first in a tackle attempt. The 25-year-old Pro Bowler went down reaching for his back, with his legs appearing to have gone limp. He was transported from Paul Brown Stadium to University of Cincinnati Medical Center,  and today, Aditi Kinkhabwala of NFL Network said it was a “spinal contusion.” He has since regained some movement in his lower extremities.

Bengals linebacker Vontaze Burfict was the victim of another violent hit at the hands of JuJu Smith-Schuster in the fourth quarter. Smith-Schuster stood over the controversial linebacker in as a taunting mechanism, likely to retaliate for Burfict claiming Antonio Brown was ‘faking’ a concussion Burfict inflicted on his two years back. The message was heard loud and clear as last night Burfict was was carted off the field and out for the rest of the game with a head injury.

The sports world took to Twitter to express how bad a look this was for not only these two teams but for football in general.

This game is hard to watch for a number of reasons…terrible for the NFL and the game of football overall.

Imagine being a parent with a child who loves football and want to play. You’re watching this game. You ask, “How can I let my child play anything other then flag? Ever?"

A couple years ago, I wrote the players need to police themselves; there’s only so much rules-makers can do. I was ridiculed. Maybe rightfully. But I still believe that.

There has been so much crazy/weird/bad stuff in this game that I almost forgot it is actually a pretty good game, well, by "good" I mean it is close and late.

Concussion 2 will just be highlights of tonight's Bengals/Steelers game.

This is a bad night for football. Really bad.