4 Sprinting Workouts To Speed Up Your Fat Loss 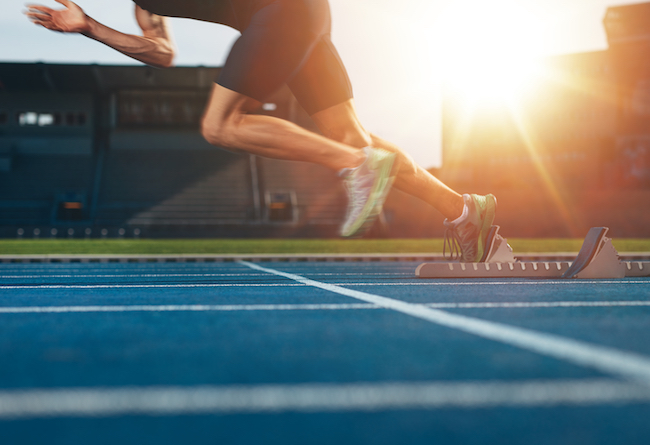 There isn’t anything better than being a slow white dude, getting out to the track, and going through a sprint workout. I feel like I’m Usain fucking Bolt every time I open it up on the straight away. Even if I’m so slow NFL offensive lineman could kick my ass in a foot race.

That doesn’t mean I stop sprinting though. Because there’s almost no better workout than a sprint workout.

Sprinting is one of the best things to do if you’re looking to build nice glutes, strong legs, awesome abs, and shed fat. Ever since HIIT got popular, sprinting has started to get more and more recognition for being a badass workout.

Here are 4 sprint workouts to use once or twice a week that’ll leave you feeling like Usain Bolt, and only slightly slower than you are right now.

This one is simple, you’re using the curves to build up to top speed, and then you open it up like a motherfucking cheetah on the straightaway.

1 curve and 1 straight away counts as one rep. The entire process shouldn’t take any longer than 30-45 seconds. The whole key to sprinting and HIIT in general is giving yourself enough time to recover. Shoot for 2-3 minutes to recover before starting the next rep. Repeat for 10 total reps and say goodbye to your hamstrings.

Hills are brutal, and one of the oldest sprinting challenges known to man. Sweetness himself, Walter Payton is famous for his hill. Same with Jerry Rice. Hills kick ass. Nearly every hill out there is different. Ideally we want a hill that doesn’t go any longer than 50-100 yards, and has a steep incline.

Give yourself adequate time to get warm on this one. Also, be prepared for your quads to feel it more than normal sprinting. Hill training places a ton of emphasis on the quads, instead of the hamstrings like normal sprinting does.

Short on time or space? No biggie. You can still squeeze in a quickie. One of my favorites goes like this:

If you’re feeling really crazy, or just want to up your game on D next time you play pick-up basketball you can also work in some lateral movements like shuffling then sprinting into the reps as well.

Anyone who has ever played organized basketball is familiar with this one. Suicides suck. And there’s no way Samuel L Jackson in Coach Carter actually got a player to run 1,000 of them. That’s downright preposterous.

Suicides are awesome if you don’t have a track or hill to use, but you do have a basketball court. They go like this:

Rest for 3 minutes between each suicide, and repeat for 8 reps total. All in all it shouldn’t take longer than 20-30 minutes.

With all sprinting give yourself adequate time to recover between reps, and pay special attention to getting warm. Dynamic warm-ups like high knees, high kicks, skips, and jogging are best. If you don’t pay attention to the warm-up, and you’re not ready to sprint, it won’t be long until you’ve pulled a hammy and you’ve got another excuse to be skipping leg day.

[J.Camm’s Note: And, when you lose all that fat and get super fast, you’ll for sure be doing this with your best Bro. Man, that friendship is a thing of goddamn beauty.]