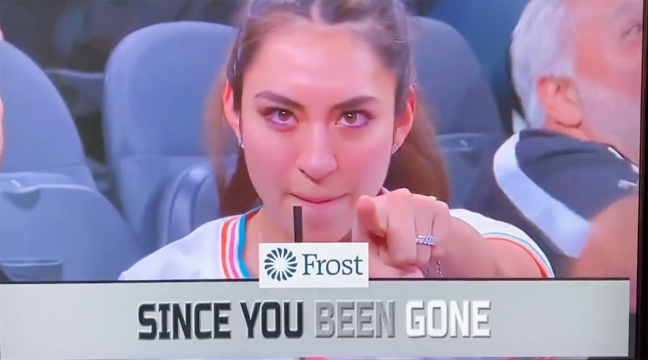 The San Antonio Spurs are not particularly good this year. However, at 33-45, they are currently in line to earn the 10-seed in the Western Conference. Despite the fact that every game down the stretch is extremely high-stakes, the highlight of Sunday night’s home win over the Trail Blazers was not on the court— it was in the stands.

At one point during the second half, the jumbotron turned the entertainment toward a sing-a-long of Kelly Clarkson’s smash hit ‘Since You’ve Been Gone’ and it led to one of the greatest in-game recitals of all-time.

She delivered a first-ballot Hall of Fame jumbotron performance.

The camera made its way around the stadium looking for fans who were into participating. And then it stumbled on one Spurs fan who was seemingly sitting with her fiancee/husband/boyfriend and her or his family. She was singing along with some serious passion.

And then, when the camera turned to her, she took the performance to the next level. From her facial expressions, to the passionate dance moves, it should be nominated for best live performance at The Grammys, which were being held a few thousand miles West at around the same time.

The highlight of the entire performance was her choice of microphone. Throughout the sing-along, the fan held her beverage of choice in a long mug with her straw coming from the top as if she was Clarkson herself with a sold-out arena in the palm of her hand, which — in a way — she was.

Take a look at the legendary performance: