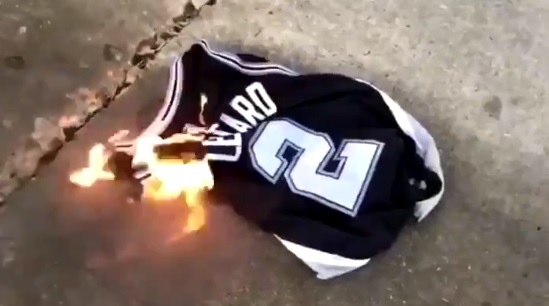 This afternoon we learned that Spurs superstar forward Kawhi Leonard wanted out from San Antonio and will be looking to seek a trade this offseason.

Leonard, according to sources, has grown frustrated with how the organization handled his quad injury and feels the franchise turned on him once he sought a second opinion.

Leonard has Los Angeles — preferably the Lakers — at the center of his preferences for a trade destination, league sources told ESPN’s Adrian Wojnarowski.

Leonard is eligible to receive a five-year, $219 million contract extension from the Spurs this summer. He can opt out of his current deal after next season and become a free agent in July 2019.

There’s a feeling of betrayal that, at this juncture, appears irreparable; Leonard isn’t concerned about missing out on the supermax, sources said

It’s been less than 10 hours since the news broke but unhappy Spurs fans have already taken it upon themselves to burn their Leonard jerseys in response to Leonard’s trade request.

And it begins in San Antonio, Kawhi wants to be traded and Spurs fans will not be happy!! pic.twitter.com/mYGPB8iqRM

Spurs fans had been disappointed and angry at Kawhi for sitting out during the playoffs so it’s not much of a surprise that would start burning his jersey already.