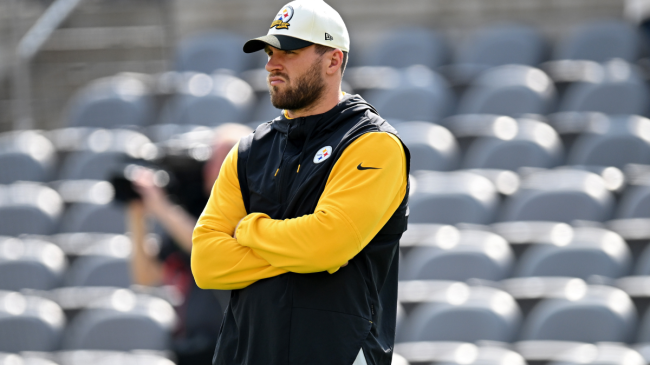 TJ Watt appears to be on track for a relatively quick return to the playing field. Many believed his season to be over after suffering a Week 1 pectoral injury against the Bengals.

A season ending setback would be a huge blow to the Pittsburgh defense as they’d lose last year’s Player of the Year. Watt racked up 22.5 sacks a season ago, leading the NFL. This coming a year after leading the league in the category in 2020, too.

After examination, it was determined that he’d landed a low-grade tear, which would require a recovery time of about four to six weeks. That gave Steelers fans optimism of a midseason return to the roster. A recent clip of the talented defender, though, might signal that Watt could get back on the field after his four-week IR stint.

The pass rusher was seen running drills at the Steelers’ practice facility this week, and he looked pretty good in doing so. That chest injury didn’t seem to be bothering him too much, despite being just two weeks removed from the setback.

The video had Steelers fans hopeful for a speedy return.

DK Pittsburgh Sports posted the clip of TJ Watt participating in drills on Twitter, and it’s getting quite the reaction from Steelers fans. Watt is seen running the ladder and getting some work in on the bull rush station, seeing minimal effect from that chest.

Now, he’s not ready for a return to the field quite yet, and he still has two more weeks on the IR, but it’s encouraging to see him back in (limited) action.

Check out the immediate response from fans.

One Steelers supporter wrote, “AFC North is shaking,” after seeing Watt get back on the field. In the defender’s only game this season, he helped Pittsburgh upset the Bengals by landing a sack and a pick.

Another fan commented, “Methinks he’s ready to go as soon as the 4-week IR is up. Dodged a bullet. Not that the Steelers will have a shot at winning anything this season, but the man is fun to watch either way.”

If he does return in Week 6, it will be much, much quicker than the original outlook.

Methinks he’s ready to go as soon as the 4 week IR is up. Dodged a bullet. Not that the Steelers will have a shot at winning anything this season, but the man is fun to watch either way.

Pittsburgh will be without its top defensive player for at least two more games. After that, we’ll see if Watt is able to suit up.