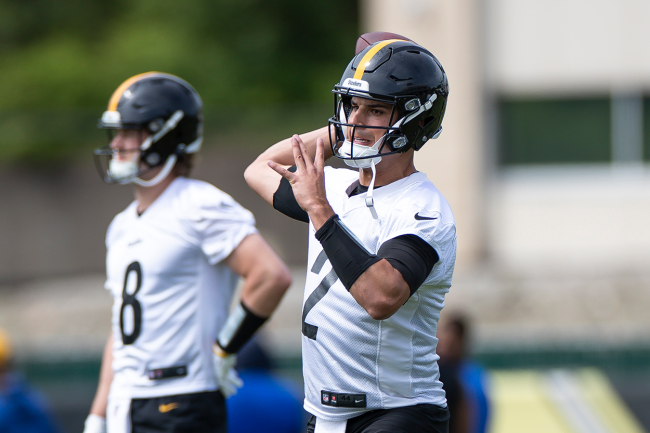 When the Pittsburgh Steelers drafted Mason Rudolph out of Oklahoma State, Ben Roethlisberger was famously unwilling to hold his competition’s hand as he developed. Now that the role has reversed, Rudolph is not following his former starter’s approach and Steelers fans are freaking out.

As things currently stand, Pittsburgh has has three quarterbacks on the roster after drafting Kenny Pickett and signing Mitch Trubisky. Rudolph appears to be the odd man out, should the team decide not to carry all three guys.

In turn, he may or may not be trying to prove his worth by offering to mentor the other two. He may also be trying to simply say the right thing.

Either way, Rudolph said that he is more than happy to help out the rookie from just up the road or Trubisky, who is in his first year with the organization.

“We’ve probably all been in situations, whether it’s high school, college or pro, where we’re the incumbent starter, and there’s a new freshman, there’s a new rookie, there’s a highly recruited guy,” Rudolph said, via Brian Batko of the Pittsburgh Post-Gazette. “I’ve always believed in, the starter shouldn’t have to go out of his way, because he’s got a lot of things to deal with. But definitely be open to questions and help the growth and development of a younger quarterback, yeah.”

Rudolph’s comments on mentorship has sent panic throughout the state of Pennsylvania and sparked a lot of jokes.

Over the course of his career, Rudolph has thrown 16 touchdowns en route to a 5-4-1 record. Despite being over .500 in his career, he has not stood out as a future Hall of Famer by any means. He’s not really that good.

As a result, Steelers fans want him as far away from Pickett as possible.

Please leave Kenny alone. He doesn’t need to learn anything from you 🤦‍♂️ https://t.co/es0G3MfbaU

This is not who u want helping develop anybody. He hasn’t developed yet himself https://t.co/Q1CMdEtcPj

The last thing this team needs is Rudolph taking the reigns to develop Pickett.

Football fans also joked that the younger quarterbacks simply would not be interested in his help and that Rudolph is doing whatever he can not to be cut.

younger QBs: “We have no further questions, your honor.” https://t.co/N5j3j9JkUP

There is one thing that Rudolph could teach Pickett— if a giant defensive end is charging at you with a helmet in his hand… run.