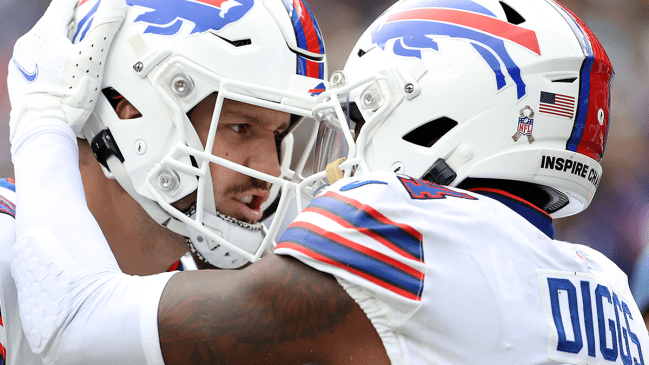 There is still plenty of football to be played in the NFL this season, but as things currently stand, the Buffalo Bills appear to be the team to beat following a 2-0 start where they had absolutely no trouble dispatching a couple of opponents who looked like they had a chance to put up a fight on paper.

Josh Allen has obviously played an instrumental role in reversing the fortunes of a franchise that’s finished the past two seasons at the top of the AFC East (something that hadn’t happened since the start of the 1990s). However, he’s gotten plenty of help from his teammates—especially Stefon Diggs.

The wide receiver has made quite the mark since taking his talents to Buffalo in 2020, and it’s safe to say he’s developed some incredible chemistry with the quarterback who serves as the other half of one of the most dynamic duos in the league.

Both players have signed contract extensions that will theoretically see them play together on the Bills until 2027, and based on what Diggs had to say during a recent interview, he’s very invested in making sure they’re partners for a very long time.

On Tuesday, Diggs called into The Rich Eisen Show and shared some incredibly effusive praise for his QB.

We asked #BillsMafia WR @stefondiggs after his three-TD performance who exactly HIM is and just how much he loves @JoshAllenQB:#NFL @buffalobills pic.twitter.com/KDMPTiN3hg

Here’s what he had to say via NFL.com:

“[He’s] like family. That’s my guy. I’m trying to get some Christmas cards with us on it…

He’s a hell of a quarterback. Since I met him, it kinda clicked. You don’t click with everybody. That’s somebody I felt like, damn, I could grow old with you. I can see myself with you for a while.”

Now, I have no idea if Diggs was consciously referencing The Wedding Singer when he dropped that quote, but it sure sounds like he was alluding to the ballad Adam Sandler serenaded Drew Barrymore with at the end of the movie.