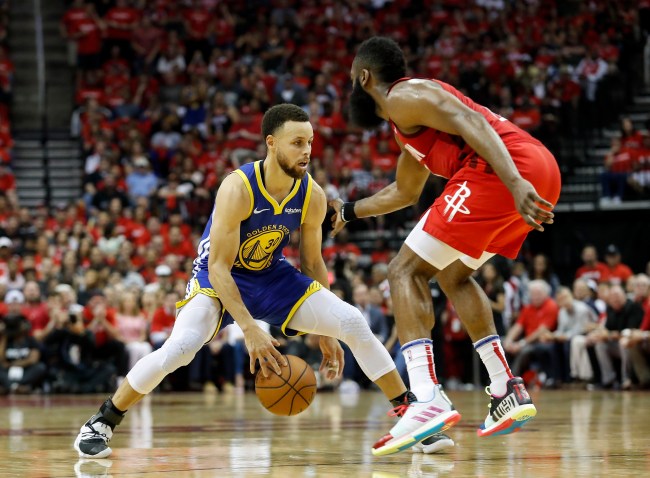 Steph Curry is looking to return to form in Game 4 against the Rockets tonight after a crap Game 3 in which he scored 17 points on 7-of-23 shooting including 2-of-9 from downtown. In the fourth quarter and overtime he was at his worst–0-6 shooting, 4 fouls, one turnover, and one embarrassing muffed dunk.

He’s been so un-Steph-like that even Draymond Green’s mom didn’t hesitate to twist the knife.

The internet is undefeated! https://t.co/blh0aFsKrR

Curry’s atypical performances can be attributed partially to a dislocated middle finger on his left hand that he suffered in Game 2.

Although X-Rays were negative and the injury was on his non-shooting hand, it looked bad.

Reporters were able to capture some photos of Steph’s finger at Monday’s shoot around and it still looks a bit bruised and chunky.

The taped up finger of @warriors @StephenCurry30 photographed during practice session before the start of Game 4 of #NBAPlayoffs at the Toyota Center in Houston, Texas on May 6, 2019. #DubNation #warriorsground #strengthinnumbers #stephencurry @dkurtenbach @BayAreaSportsHQ pic.twitter.com/Dxqdh8Qh84

Tonight is going to be real interesting to see how Steph bounces back from the compiling criticism. For the series against Houston, he’s 8-for-32 from 3. If I were a betting man I’d throw money on Steph scoring 28 on 6-9 from deep. BOOK IT BABY!