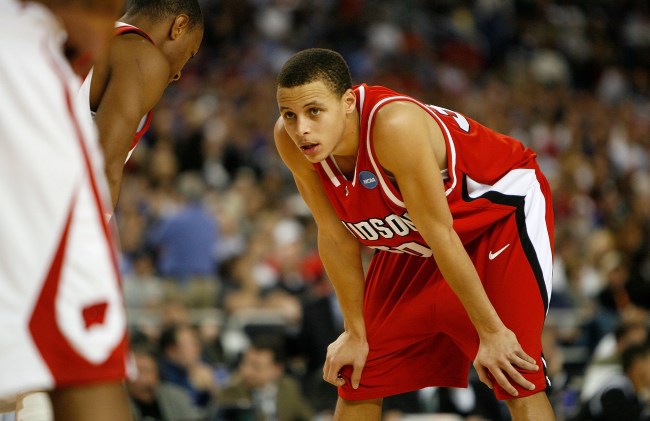 Steph Curry was a big IF upon entering the 2009 NBA Draft.

Scouts had problems with his questionable shot selection, as nearly 60 percent of his total shot attempts as a freshman were 3’s (he’s since proved that to be a plausible business plan). As a junior and his first full year as a point guard, Curry failed to lead his team to the NCAA Tournament for the first time in three years, losing to College of Charleston in the Southern Conference Tournament. He was dubbed a “tweener” who couldn’t decide if he was a point guard or shooting guard, prompting an NBA.com Draft profile to claim Curry is “not a natural point guard that an NBA team can rely on to run a team.”

Ugh, 4 more years of our fortunes tied to Steph Curry's lousy ankles? This is why God made beer @957thegame

Ten years later, Curry has solidified himself as one of most electrifying players of his generation and arguably the best shooter of all-time.

In a recent Players’ Tribune piece titled Underrated, Curry opens up about how the degrading assessments of his game in college angered him beyond belief.

Via The Players’ Tribune:

“I remember Doug Gottlieb, who was a major draft analyst at the time, talking about how there were six other point guards in my class with a higher upside than I had. SportsCenter put up a tweet with his comment on it…… and I guess someone found that tweet a few years later, once we started having success in Golden State? So now it gets recirculated every so often. 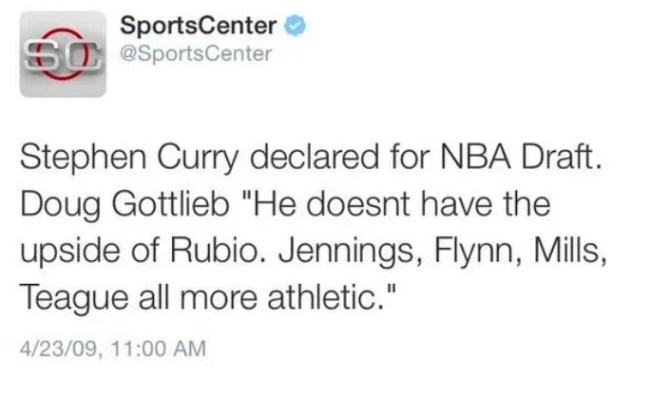 And of course I’m just playing, and I can smile about something like that now. But at the time?? Man…. it’s hard to even describe how much comments like that bugged me.

All this analysis that people would put out there, all these scouting reports and whatever, that kept the focus on what I supposedly couldn’t do. “Undersized.” “Not a finisher.” “Extremely limited.” I can still reel them off to this day. But what’s even crazier is how, also to this day — even with how I’ve ended up doing my thing, and even with all of these unique types of players coming into the league and showing what they can do — you’re still seeing these so-called experts scouting hoops that same old way: by focusing on the downside of what guys can’t do.

Instead of figuring out the upside of what they can.”

He’s right. That’s why I never got drafted. Scouts just couldn’t see the upside. Fuck, man. What could’ve been. RAINDROPS!