Stephen A. Smith Had A Shockingly Humble Response To Getting Called Out By Baker Mayfield’s Wife For His Poorly-Aged Take About The QB 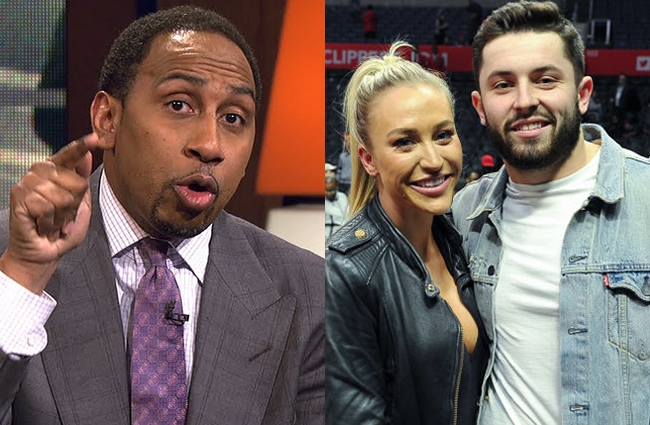 The Cleveland Browns haven’t appeared in the playoffs since being eliminated in the wild card round following the end of the 2002 season on the back of Tim Couch, and since then, the team has seen 24 different quarterbacks start the game in the pocket—four of whom were drafted by the franchise in the first round in the hopes they’d be the key to finally turning things around.

However, with the possible exception of the Jets, there’s no franchise that has specialized in the art of essentially destroying the professional career of a highly-touted prospect almost as soon as it begins quite like Cleveland, and while Johnny Manziel certainly didn’t do himself any favors, the Browns didn’t exactly set up Brady Quinn and Brandon Weeden for success.

The only real upside of Cleveland’s 0-16 campaign in 2017 was that they were able to secure the first pick, and while it seemed like Baker Mayfield would be just the latest in a long line of players to fall victim to the Curse of Being a Quarterback For the Browns, it’s looking like the team may finally be on the cusp of turning things around after a couple of impressively miserable decades.

According to Stat God Steve Kornacki, Cleveland currently has a 97% chance at making it to the postseason after starting 9-3 to ensure they’ll finish the year with a winning record for the first time since 2007. Mayfield has played a big role in that turnaround, but with that said, his performance hasn’t been enough to silence the haters entirely—including Stephen A. Smith, who was still less than impressed with how he was playing heading into the weekend.

There's no quarterback who has done LESS with MORE than @BakerMayfield. I still respect him, but he’s got to do more if the @Browns are going anywhere. pic.twitter.com/PIpmfQrAJh

After he led the Browns to a 41-35 win over the Titans, Mayfield’s wife Emily couldn’t stop herself from doing a little bit of trolling by hopping on Twitter to call out the talking head for his retroactively Cold Take.

As if 2020 wasn’t wild enough already, Smith took some time to address the shot that was fired his way on First Take on Monday and *gasp* admitted he may have been wrong while saying he “loved” her response and giving Emily props for backing up her husband.

It’s not exactly shocking to see a player’s significant other use social media to defend their honor, as Patrick Mahomes’ fiancée Brittany Matthews has been a bit too eager to do over the course of a season where she’s probably overdone it a bit. However, it’s hard to hate on Emily for that response and—as much as it pains me to say it—respect to Smith for giving credit where credit is due.