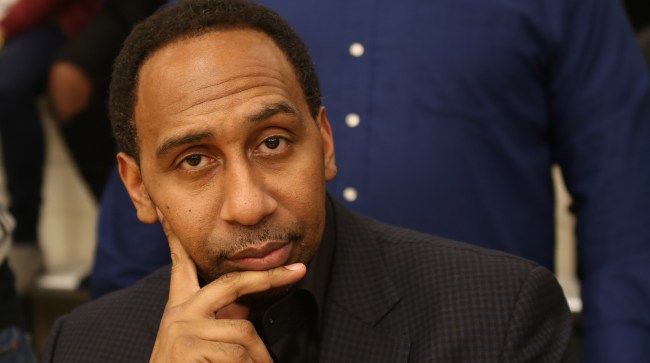 Stephen A. Smith just got paid, my friends.

Two weeks ago it was reported that Smith was on the verge of a monster new deal at ESPN and now the latest report from New York Post certainly confirms it’s a massive number.

Smith’s reported new five-year deal will earn him close to $8 million per year making him the highest paid sportscaster at the network. Mike Greenberg, the host of Get Up! was the highest-paid caster making $6.5 million per year.

It was rumored that he may hit the $10 million per year mark, but according to the report it is just under $8 million, but he did receive money upfront. As for any sort of new role, it doesn’t appear anything completely new is on the horizon, but I’d get used to seeing plenty of Smith all over the network.

Smith will continue to be front and center on ESPN’s air with his daily morning show “First Take,” as well as on “SportsCenter” and the network’s NBA coverage. Though the finer points of the contract are not fully completed, Smith has already started hosting Wednesday’s “SportsCenter” leading into ESPN’s NBA schedule that night.

It’s also reported that ESPN is hoping to find a place for Smith somewhere on ESPN+.

ESPN is clearly going all-in on Smith and it seems like a no brainer given how popular First Take has been over the years, his knowledge and passion for the NBA and his successful radio show/podcast. For as much turnover and change the network has gone through over the past couple of years, Smith has been the one constant.

Getting paid around $8 million to give your sports takes on national tv and on the radio is a pretty solid gig I’d say.