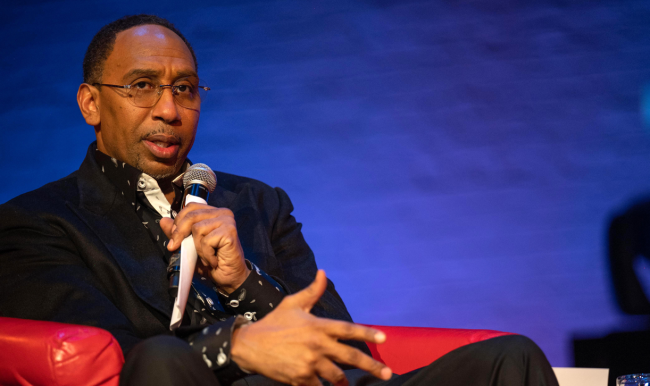 For the third time this year, Stephen A. Smith was duped by a tweet from the parody account Ballsack Sports.

That’s right. Not once, not twice, but three times this year Stephen A. Smith has gone on the air treating a fake tweet as if it were actual news.

Not only that, this week Smith cited the exact same report that he was duped by back in March.

“There was some chirpin’ about how James Harden and Kyrie Irving got into it in practice when Kyrie said he was washed up or whatever,” Smith said this week on ESPN’s First Take. “We don’t know how much truth there is to that, but that was the storyline…”

(1) Actually, Stephen, we do know that there was zero truth to it, and (2) the only reason it was a storyline is because you regurgitated what Ballsack Sports’ said in their fake tweet.

Ladies and gents, we are back on ESPN again 😭😭😭

Apparently he learned nothing from what he said in March when he first cited Ballsack Sports’ fake tweet that claimed Kyrie Irving “looked James Harden in the face and told him ‘you washed up.’ He said that to him. That’s part of the reason they had a falling out in Brooklyn.”

Then there was the time, less than a month later, that Stephen A. Smith once again used Ballsack Sports as a source during an episode of First Take.

Even Kevin Durant knew that Smith got got on that day.

Damn steve. Got ya ass https://t.co/oyZY5uPCKx

Stephen A. Smith and other ESPN talking heads keep getting duped by Ballsack Sports tweets

Sadly, Stephen A. Smith isn’t alone among his ESPN brethren when it comes to being fooled by Ballsack Sports.

In July, during an episode of This Just In on ESPN, hosts David Jacoby and Kendrick Perkins spent an entire segment talking about a fake Ja Morant quote.

Ja Morant says Michael Jordan would be “just another superstar” in today’s game—says today’s talent is at all time high. pic.twitter.com/eAGTjfiFQS

That was the second time in a month that Kendrick Perkins had been duped by a Ballsack Sports tweet.

i know ESPN did not just do an entire segment based on a ja morant “quote” from ballsack sports 😭😭😭 pic.twitter.com/UqihKpMddW

Amazingly, a month before Stephen A. Smith was fooled for the first time by Ballsack Sports, Perkins used them as a source on the EXACT SAME FAKE STORY that Smith has now cited twice!

ESPN: The worldwide leader in never letting facts get in the way of a good story.