Stephen A. Smith Explains Why He Thinks Gregg Popovich Is A Candidate For Nets Head Coaching Job 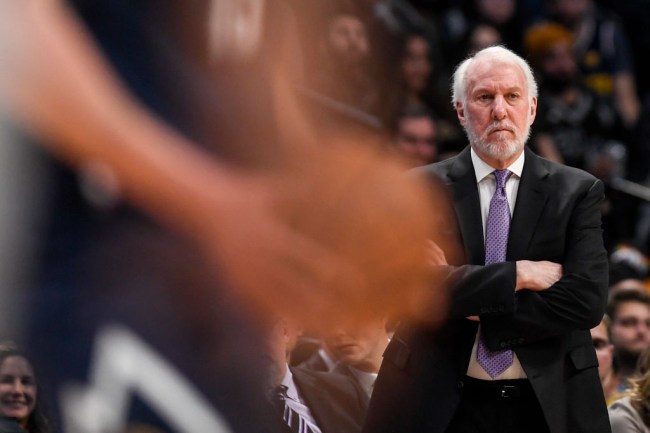 While the Brooklyn Nets have been far from full strength this season, they still elected to part ways with head coach Kenny Atkinson over the weekend despite the fact that they hold the No. 7 spot in the Eastern Conference.

This season was always going to be a bit of a wash with Kevin Durant sidelined with injury, but next season the Nets should be a serious threat in the East. It’s clear that the Nets didn’t believe Atkinson was the guy to propel them to new heights next season so they pulled the plug early.

Now that Atkinson is out, it’s officially time to look at head coaching candidates for what is an extremely intriguing position to lead a Kyrie Irving and KD led Nets squad.

During Monday’s edition of ESPN’s First Take, Stephen A. Smith named his three candidates that could be tapped to take over Brooklyn. The first two names he mentioned were Ty Lue and Mark Jackson, which aren’t necessarily monstrous names, but his third candidate certainly was.

Smith claimed that Gregg Popovich could be a legitimate candidate for the Nets’ head coaching job thanks to the ties between Pop and Nets general manager Sean Marks. Marks is a former San Antonio assistant, so there is that connection to note.

According to @stephenasmith, there are only three candidates to fill the head coaching job with the Brooklyn Nets …

… one of them is Gregg Popovich. pic.twitter.com/yc6jUkg6zS

Smith also pointed out the fact that the Spurs have Tim Duncan and Becky Hammon on staff and that Popovich could look to elevate them into larger roles. Pop leaving San Antonio for Brooklyn would create that opportunity.

With all of that being said, it’s pretty much impossible to imagine Popovich coaching a team other than the Spurs, the only NBA team he’s ever coached.